Life Is Not a Photograph

Ah, the much-anticipated (or the much-dreaded) family photo: it was a day we had planned with as much precision and forethought as possible.  I had purchased matching dresses for the girls, conjured in my mind what coordinating outfits Ben and I could wear to add some semblance of cohesion in the photographs, and selected a day in the spring when we would surely be past the horrific and harsh weather.  Our friend and freelance photographer, Ani Wallach, did such an outstanding job at our photo session last summer that we chose to book her again.

You see, our family is fairly lax in our daily appearance, and the only moments we tend to pause for photos are special occasions, such as birthdays or holidays or weddings.  Yet sending a family picture with our annual Christmas card and letter is practically a tradition, and one that adds a heartwarming and personal flair, I might add.  So it has become almost a necessity (in my mind) to hold an “official” family photo session that might – somehow – capture the essence of our family’s identity for others to witness.

So the drama began when we rescheduled – twice – due to inclement weather.  I knew that was a possibility, so the third date, I told myself, would stick.  Naturally, the third date was one that finally didn’t include sleet or freezing rain or chilly temperatures in the forecast, but instead chose to present itself in that typical, fickle spring showcase of scattered thunderstorms and intense wind.

When I say intense, I mean a vortex of wind that nearly knocked us all over.  It frightened Sarah and instigated a new level of anxieties for Felicity.  I prayed to Our Lady when we took one step outside of the car and into the outdoors that she would somehow intercede so that the imminent storms might be delayed just for a bit longer.  Thankfully, the storms weren’t an issue, but the wind – oh, the wind!  I realized as I gritted my teeth to hold a smile while restraining the urge to pull my hair out of my mouth and eyes while Ani snapped shot after shot, Life sure is no photograph! 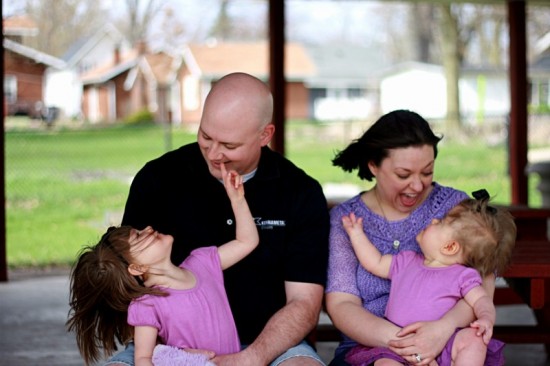 I knew the real story behind our photos would never be known unless they were explicitly shared, so this is my attempt to do just that.  I wondered, as Felicity screamed, “Go away wind!” and Sarah shrieked due to a short-lived afternoon nap and dinnertime hunger pangs, just one thing: How many other families have a story behind their smiling faces in photos?  The thought occurred to me that this was probably more common than I previously believed; we send photos to loved ones and even proudly post them on Facebook or other social media for display.  We receive compliments and praises on how lovely we are dressed or what a nice-looking family we present ourselves to be.  But truly, life is not a photograph.

To get that one shot of the girls actually pretending to want to sit next to each other and for Felicity to perhaps plant a kiss on the cheek of her little sister, took (and I’m guessing here) probably about a dozen missed shots that told the real story.  To get them to smile was honestly a minor miracle (especially to smile simultaneously)!

Ben was grumbling most of the time as he wrangled one child or the other; his contacts burned his eyes due to the gusts and wind tunnels descending upon us like ravenous lions as they devour their prey, and suddenly one swift and powerful surge of wind blew dirt and debris into both eyes so that his contacts felt gritty and painful against them.  To muster even a slight smile was quite the effort for him after that.

I, being the overly sensitive type, was constantly concerned about how everyone else was feeling; to take one glance at a fussy baby, screaming and uncooperative preschooler, and grumpy husband gave me all the answers I was seeking.  Disheartened yet undaunted, I encouraged everyone to soldier on, and soon the battle would cease!

So one can imagine my pleasant surprise when I actually saw the finished products.  On the one hand, it truly is a testament of Ani’s artistry as a photographer to have been able to capture any iota of authenticity or warmth from us that day, since all of the elements were acting against us.  On the other hand, I recognized the sincere and genuine smiles and laughter, however fleeting they seemed to be at the time.  And I suppose, while drama ensued and nothing seemed to fall into place perfectly that day, our family’s essence was still captured beautifully in that place and time.

While life is not a photograph, pictures do still tell us a story of a person, place, or time, and they leave future generations with a legacy that often far exceeds in potency and profundity the written word or oral tradition alone.  These photographs remind me of some of the hardships and adversities our family has experienced collectively and individually, but that, in the end, we triumph in strength and splendor.  And that is the story I want to tell through our life together.