Pirates, Terrorists, and the Joy of the Gospel in Kenya, Nairobi

Editor's note: Today, we are thrilled to share a guest article from Sr. Margaret Kerry, fsp. A Daughter of St. Paul, a gifted writer and a missionary, Sr. Margaret offers us a special perspective on life and faith in Africa. LMH

Pirates, Terrorists, and the Joy of the Gospel in Kenya, Nairobi

“Solidarity… is not a feeling of vague compassion or shallow distress at the misfortunes of so many people, both near and far. On the contrary, it is a firm and persevering determination to commit oneself to the common good; that is to say, to the good of all and of each individual, because we are all really responsible for all.” Solicitudo Rei Socialis, no. 38.

Sr. Mary Augustine is visiting us from Kenya this week. Originally from Ohio, Sr. Augustine has been a missionary to Africa for almost 30 years.  When she arrived, young African women were joining our order from each of the countries where we are present. An inter-continental novitiate was formed. Augustine taught the art of printing, layout, and design for publishing. Now, she tells me, these young women are the leaders in our congregation in Kenya, Nairobi, the Sudan, and all of the countries where we are present and there are still many young women coming to join our community. 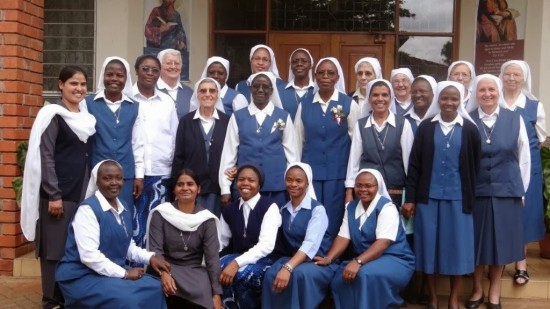 One of the challenges the sisters have is raising funds for education, which is so important for our media apostolate. Sr. Augustine reminds me that the women are not just coming for an education; they persevere in religious consecration beyond completing their degrees in Theology. They realize there is a thirst among Africans for spirituality and a quest to strengthen the family. This is why our publishing house is occupied in publishing books and media on these subjects along with the many other books and movies they produce.  One young Kenyan sister, Sr. Josephine, recently stayed with us in Boston for a month so she could learn how to create e-books, build a web site and use social media. Her serious pursuit of these important means of new evangelization was evident. She was so grateful for all that the sisters in these departments shared with her. In Kenya, while they do have Internet access electric black outs are the norm. Sr. Mary Augustine said water is the greater concern. The sisters just had a well dug so they would not be without water as has happened in the past.

What are the national concerns in Kenya? I ask Sr. Augustine. We hear about the girls kidnapped in Nigeria, for example. She answers without hesitation: Pirates, refugees from Somalia the neighboring country, and the rebel group Al Shabaab recruiting young refugees for terrorism. All of the refugees are in enclaves in Kenya. Since late 2011, Kenya has seen an upsurge in violent terrorist attacks. An increasing number of terrorist attacks in Kenya have also been carried out by local Kenyans, many of whom are recent converts to Islam, typically young and overzealous, poverty making them easier targets for the outfit's recruitment activities. The latest large attack was in September of 2013.  Armed gunmen attacked an upscale shopping mall in Nairobi, killing at least 39 people and injuring more than 150. 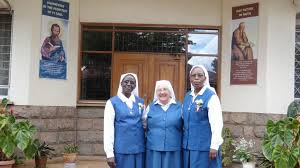 There are only about 1,000 Christians left Somalia and of these 100 are Catholics. There has been no Archbishop since 1989. The State religion is Islam. Just this past March Islamic extremists from the rebel group Al Shabaab militia publicly beheaded a mother of two girls and her cousin in southeastern Somalia after discovering they were Christians. Before killing them, an Al Shabaab militant announced, “We know these two people are Christians who recently came back from Kenya—we want to wipe out any underground Christians living in jihadists territory.

Another reason Somalians are intent on terrorism in Kenya, says Sr. Augustine, is because African Peace-Keeping Troops are Kenyan. They are retaliating for any interference in their country.  Pirates on the coast are also Somalians, as depicted in the film Captain Phillips.

As Sr. Augustine relates these challenges to me she doesn’t look worried. Her time in Africa has been filled with many graced events. Yes, terrorists have come very close to our Catholic book centers and convents. It is the unchanging Gospel message that gives her and the sisters joy. She expresses this during her visit to the States by holding small exhibits of Fair Trade items created by local artisans. Opening a bag full of rosaries she tells me how each individual bead is made. “It takes two hours to make one rosary,” she explains. The statues are carved out of ebony by people sitting on the side of the road or by groups joining in cooperatives at Catholic Churches.

The sisters in Africa also have amazing publications. The New African Bible with commentary and notes that pertain to African culture has been very popular. Their website gives an overview of all the evangelizing work the sisters carry out on the Continent: http://paulinesafrica.org/. In Africa, between 1978 and 2007, the number of Catholics grew from 55 million to 146 million. Pope Francis tells us “The primary reason for evangelizing is the love of Jesus which we have received, the experience of salvation which urges us to ever greater love of him” (EG, 264). We are in solidarity with our brothers and sisters in Africa as we commit ourselves through prayer, action and daily witness to the Gospel of joy.  If you wish to contact Sr. Mary Augustine she may be reached at Augustine@paulinesafrica.org. 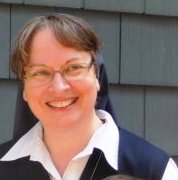 Sr. Margaret celebrates 40 years of life and mission as a Daughter of St. Paul. She completed a Masters at Boston College School of Theology & Ministry pursuing ways to proclaim the Gospel today.  Sr. Margaret gives presentations on the Vocation and Mission of the Laity, Evangelization and Media Literacy. She directed the Pauline Lay Association for 15 years (paulinelaity.blogspot.com) and was creative editor of The Pauline Cooperatormagazine for 10 years.  An author, (St. Anthony of Padua: Fire & Light; Strength in Darkness: John of the Cross) Sister is presently working on a young adult book. You can reach her at mkerry@paulinemedia.com