St. Thomas More is one of my favorite saints, stemming from the first time I watched the Academy-award winning movie A Man for All Seasons about his martyrdom at the time of the English Reformation. Watching the movie, I admired Thomas’ courage and love of God, but what struck me forcibly was the movie depiction of his relationship with his eldest daughter, Margaret (Meg). 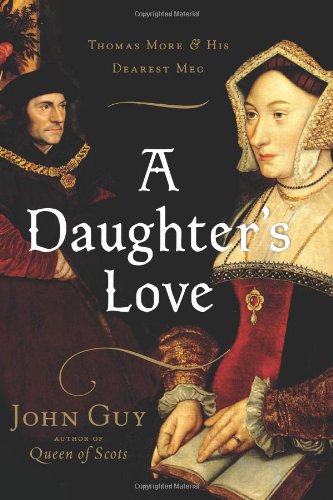 Knowing this, my husband gave me John Guy’s A Daughter’s Love: Thomas More and His Dearest Meg for my birthday in April.  Guy, a historian and professor at Cambridge, rewrites Thomas’ story through the lens of his relationship with Meg, who, of all his children, most resembled him in intellectual talent and spiritual understanding.

Guy writes not as religious man but a historian and a storyteller, and A Daughter’s Love is anything but hagiography. He doesn’t shy away from the less agreeable acts of Thomas’ political life---such as burning heretics at the stake---and he’s critical of Thomas’ decision to not allow Meg to publish her own work.  (Meg eventually did publish anonymously, after she married.)

Regardless, Thomas and Meg are the clear heroes of the story, and toward the end, Guy’s straightforward account allows both Thomas and Meg’s extraordinary virtues to shine.

If ever there was a daddy’s girl, Margaret More was it.  She, in turn, was her father’s favorite.  Her philosopher father had both his son and his daughters educated in the liberal arts, making Thomas a pioneer in women’s education.  And Meg was his star pupil.  Her command of Latin exceeded most educated men of the day; in her teenage years she was reading Seneca.

Due to circumstances involving the distribution of her dowry, after Margaret’s marriage she and her husband, William Roper, continued living with her father and stepmother for several years.  The arrangement suited Meg just fine.

Thomas resigned his position as Lord Chancellor after Henry VIII’s break with Rome in 1532.  When he was arrested and imprisoned in the Tower of London for his refusal to take Oath of Supremacy, declaring Henry head of the Church in England, and the Act of Succession, it was Meg alone of all his family who understood his reasons.

, via Wikimedia Commons
Thomas’ son and sons-in-law all took the oath; his wife, Lady Alice, visited him just once in prison in order to chide him into reason.  Meg herself took the oath but slipped in the saving clause, “as far as the Law of Christ allows.”  But because of this, and because of her own ingenuity, she was allowed to visit her imprisoned father daily and correspond with him.  Meg’s presence was his comfort and support; to her he could confide his fears, and with her he could pray.

Meg and her adopted sister Margaret (Giggs) Clement collated and copied Thomas’ writings and prepared them for publication, which eventually happened after the death of King Henry.  What we know about Thomas’ last days in prison, about his devotion to the Passion of Christ and his loyalty to the Church, is owing to his daughter.  Her devotion and her education enabled her to pass on the writings of a saint.

Purchase A Daughter's Love and support CatholicMom.com with your purchase.

A Mother and Daughter Look at a New Mother-Daughter Journal
Read
Are We Daughters of Eve or Daughters of Mary?
Read
My Daughter's Pro-Life Presentation
Read