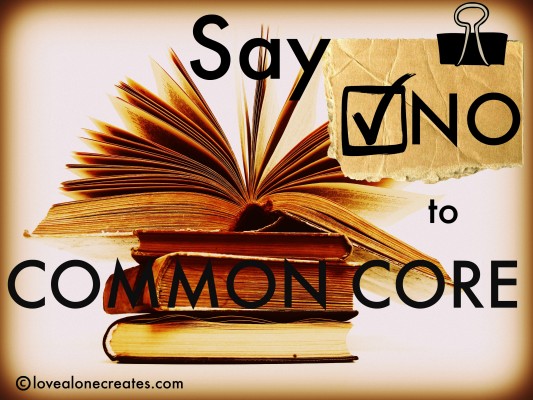 There seems to be much ado about Common Core these days, including noteworthy buzz in the Catholic blogosphere and media.  Like most modern controversies, the dilemma about whether or not Common Core is negatively affecting our children’s education vacillates between the naysayers and the proponents of well-renowned Catholic writers and speakers.  Though I am neither well-renowned nor a popular writer or speaker, I admit that my husband and I are in the “Against Common Core” camp, and I’ll tell you why.

I grew up with a Catholic education, attending the same school for first through eighth grade; following the primary grades, I chose to attend a very large and (then) reputable public high school for my secondary education.  To admit that a scathing and glaring ridge between the superiority of a Catholic education and the subpar public education would be a grave understatement; let’s just say I was bored stiff throughout high school and coolly skated through my classes to obtain my Academic Honors Diploma and move on.  Most Catholics would concur that there is something rather striking about a solid schooling from the private and religious institutions.  Sadly, that gap between private and public schools is narrowing rather quickly these days, and much of it can be attributed to the sketchy understanding and implementation of Common Core.

Political arguments and analyses aside, all can agree that Common Core’s main goal is simply this: to prepare students for a postsecondary career.  At first glance, this appears noble and righteous. However, if Catholic dioceses across the nation either blithely comply or at the very least ignore the implications of Common Core upon Catholic education, then the excellence for which Catholics have striven will be quickly exterminated.  The reason for this is as simple as the one given for the Common Core Initiative: Catholicism educates the whole person.

Our Catholic schools must up the ante in advocating for this beautiful gift we offer children: the gift of a whole and wholesome education.  Catholics know full well that we cannot teach our children about one aspect of their entire lives; we cannot compartmentalize them into career subcategories.  To do would be a grave sin against the very dignity of all humanity.  Instead, we must continue to view people through the lens of love, which necessarily means that we guide them to know God deeply, to appreciate beauty through classical art and literature, to value and respect all people and creation through morality and ethics classes, to encourage self-respect by reminding them that their bodies are temples of the Holy Spirit.  Only one aspect of human existence involves his or her career, and I will boldly and unabashedly proclaim that our identities are not found in our careers.

Work is, of course, good, and the Lord desires that we work to provide for ourselves and our families, to be able to trade our goods and services fairly with others, to assist those in our communities, etc.  Work in and of itself is good.  But to strive for the exclusivity of selecting and aiming for a career path when one is yet a child negates the intrinsic value of how and why modern education was born.  Let’s incorporate career counseling in our schools, but let it be peripheral to the higher aspiration of molding small souls for their eternal destination.

When I ponder the mess of the Common Core evolution, my heart is filled with a deeper sorrow than I can adequately articulate here.  Mainly I think of my daughter and people like her everywhere: people who were born with a physical or cognitive difference, people who aren’t considered mainstream.  How do they fit into the Common Core image of career preparation?  The truth is they don’t.  But they do and always have had a place in Catholic education, because Catholicism sees beyond the exterior of one’s appearance or the economic value of one’s potential career into the heart and soul of every human being.  Let’s keep it that way.