When Calls the Heart: “A Telling Silence” Movie Review 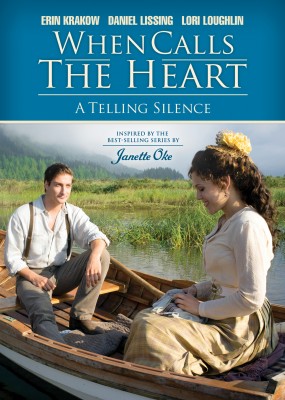 When Calls the Heart: “A Telling Silence” is the second DVD in the When Calls the Heart series by the Hallmark Channel. It is the third and fourth television episodes put together into a feature length film. The series is based on the best-selling book series by Janette Oke. The DVD was released on April 22, 2014. The story of faith, life, and love continue in this next installment of Elizabeth Thatcher's journey.

The school teacher, Elizabeth Thatcher, is learning more about her students as time goes by. She takes notice of one of her students in particular, 8-year-old Rosaleen Sullivan, who has been rendered mute by her father's passing in the mine explosion. Elizabeth spends extra time with her after school and during lunch. During one of their lunches together, a fight breaks out and Elizabeth is distracted as she tries to pull the boys apart. She turns around to see that Rosaleen is gone. Rosaleen's mother and the women in town go out on a search to find her.

Also, Jack Thorton returns as the town's constable and has reopened the church fire investigation from three months prior. He finds whale oil at the scene of the crime and notices a large amount of the very same oil at Cat Montgomery’s house. Jack questions her about the night of the fire and her whereabouts.

Elizabeth shows her faith through her relationships, like the ones with Rosaleen and Cat Montgomery. She believes in helping others in order to free them. Rosaleen needs a friend like Elizabeth to help her heal from her father's death. Cat Montgomery is assisted by Elizabeth's detective ways in order to clear her name as the cause of the church fire for the sake of her children. God erases our sins just as Elizabeth tries to do for those she loves.

This film is great for a family night. It is engaging and heartwarming. Forgiveness and love are topics brought to the forefront. These are things that God has in store for us as well. I really enjoyed seeing her journey continue. Where does forgiveness and love fit into your life?