Book Review: Journey of Our Love: The Letters of St. Gianna and Pietro Molla

St. Gianna Beretta Molla is a popular saint, not only because she was so profoundly pro-life as to give up her own life in order to save her unborn child, but also because she was a modern woman and a working mother. She is someone mothers of today can relate to and aspire to imitate as we carry out our own vocation. 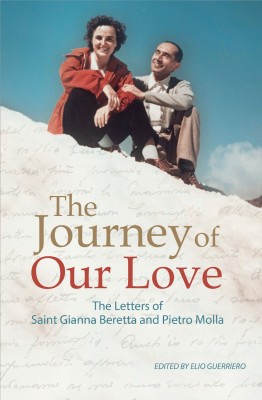 Journey of Our Love: The Letters of St. Gianna Beretta Molla and Pietro Molla (Pauline Books, 2014; also available on Kindle) allows us an intimate look at the relationship between husband and wife as they sought to establish and nurture their domestic church. While her letters were previously published, this is the first time the letters of both have been published together as Pietro Molla requested that his correspondence not be published until after his death.

As editor Elio Guerriero states in the introduction, “These letters are a convincing proof that the way of holiness does not necessarily pass through religious life or the priestly ministry, but can unfold in the midst of the world, living one’s own vocation as a Christian called to holiness with Christ in married life.”

The book offers a short biography of both St. Gianna and her husband, who met when he was 42 and she was 32. Their friendship quickly grew to love and they married in September of 1955. Their marriage would last seven short years until Gianna died soon after giving birth to their fourth child. They packed a great deal of love and joy into those years which is revealed in their letters.

Journey of Our Love includes letters from their dating and engagement period as well as their marriage. They were separated frequently due to Pietro’s work travel as well as during vacations. While they did have access to the telephone and made use of it, they often wrote each other every day during these separations, leaving a wonderful record of their relationship. The copious footnotes provide the reader with background information and allow for a greater appreciation and understanding of the text.

In the days of their courtship and engagement, we see two people who want to make each other happy and who delight in each other. As Pietro wrote on September 6, 1955, “Your love makes everything more beautiful to me.” Their love, even in its infancy, was always rooted in prayer and references to God and the Catholic faith are frequent in their epistles.  This love, centered on God, made their relationship more blessed.

During their married life, they shared the joy and expectation of the birth of their children and their struggles in caring for them when they were sick. The couple comes across very human as they discuss the early hour their daughter awakes, Gianna’s fear of airplanes, Pietro’s need to have teeth pulled, their in-laws, work issues, financial matters, and the simple missing of each other. These were two people living married life, coping with all the everyday matters that entails. Where their holy virtue is evident is that all of this daily living was deeply rooted in God. In addition, their love for each other always shines through.

Journey of Our Love is a beautiful book for anyone who has a devotion to St. Gianna and who wants to learn more about her married life. It also provides a wonderful look at the beauty of a married life rooted in the love of God, the ideal to which Catholic married couples should aspire.

The Art of Faith with tiSpark and St. Gianna
Read
St. Gianna Beretta Molla: A Modern Day Hero of Divine Love Reviewed by Patrice Fagnant-MacArthur
Read
St. Gianna and The Gift that Keeps on Giving
Read