Justin and the Knights of Valour: A Movie Review 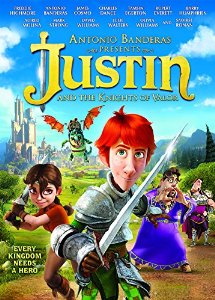 Antonio Banderas presents this great family film, Justin and the Knights of Valour, due to be released on DVD and Blu-ray July 22, 2014.

My son (who is five) was skeptical at first, but once the movie started, he couldn't take his eyes off of it.

Along with Antonio Banderas, other voice actors include Freddie Highmore, Rupert Everett, Alfred Molina and Saoirse Ronan. It has adventure, truth, and love, so there is something for everyone in the family to enjoy.

The movie is a story about a young man, named Justin, who dreams of following in his grandfather's footsteps as a true and noble Knight of Valour, when his father wants him to be a lawyer. The only problem is that knights are outlawed due to his own father and the queen. Justin's bravery and heart is put to the test during a quest to find his grandfather's sword and bring back the Knights of Valour to save the kingdom.

He meets some friends along the way, such as Talia and Sir Clorex, who teach him the skills he needs to become a knight. His bravery and strength is confronted when he battles an army led by Sota, and he learns to fight with his heart in order to show real honor. This adventure is non-stop and tells a classic coming-of-age story. Justin learns to fight for what he wants, despite what his father's dreams are for him.

Justin and the Knights of Valour is rated PG for mild action and some rude humor. Of course, there is sword fighting, battles, and fire. There is some rude humor that takes place in the bar as well.

Overall, this is a great family film that will speak to your heart. God has a journey for each of us that is written inside it. Are you willing to take a chance to fulfill the dreams that live there?

Order your copy of Justin and the Knights of Valour and your purchase will support the work we do here at CatholicMom.com.