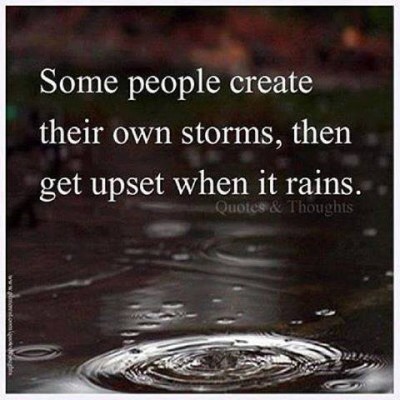 Often we create our own storms, and then do what the poster says--get upset. Why? Because the turmoil we created could have been avoided.

Three factors are involved when we create messes in our lives. The first is Guilt. Guilt is an affective state in which we experience conflict at having done something that we believe we should not have done---or conversely, having not done something we believe we should have done. It gives rise to a feeling which does not go away easily. And guilt is driven by conscience.

Now, that's hard due to the many distractions around us. It is surely hard for me. Yet can't we make a consistent commitment of even a few seconds of silent questioning before we make decisions? After his conversion to a much more moral life, Saint Augustine advocated a return to one's conscience and an actual questioning of it.

And what will come from this questioning of ourselves? The third factor: Divine Grace. Divine grace is a theological term present in many religions. It has been defined as the divine influence which operates in humans to regenerate and sanctify, to inspire virtuous impulses, and to impart strength to endure trial and resist temptation.

Guilt can turn us around. Conscience can deter us next time. But Divine Grace can thoroughly heal and change us if we are open to it. It can turn us from the old, flawed years, and create something brand new within us.