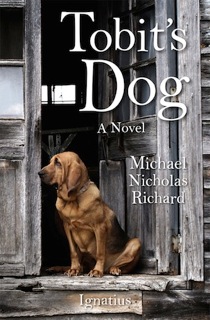 Tobit’s Dog is a love story amid the battle between heaven and hell for the souls of the good guys as well as the racists, murderers, rapists, thieves and connivers not portrayed in the biblical version of the Book of Tobit.  In this imaginary take on the Book of Tobit, exciting enough a tale, Richard skillfully uses the characters, symbols, and scriptural principles. All the vital elements are there: Tobit’s sudden blindness and miraculous healing. Prejudice and bravery — this time, involving a lynching and Tobiah’s arrest for his compassion toward the boy hanging from a tree.

Richard sets this, his first professionally published novel, in North Carolina during the depression. The Jim Crow era provides the tension between the black characters (Tobiah and family) and the white businessmen and law enforcement determined to keep the Negros in their place.  And they are Catholics. Is this how the enemies of the Jews treated the chosen people during their exile?

I relate to this language, landscape, food, music and culture, having been raised in the south, although a few decades later. The scenery, described so beautifully and succinctly, is somewhat familiar to me. More like my Texas than the biblical Nineva.

The fundamentals of the Book of Tobit are woven through the story. Yet the plot resounds with more modern twists in the elements of tragedy, heartbreak, mystery, crime and redemption. The character of traveling musician Ace Redbone reminds me of a militant Joshua from the book series by Joseph Grizone.

Reading the Book of Tobit a little along with Tobit’s Dog brought me great pleasure and insight into the plots of both books. The Book of Tobit, however, has no holy water from Lourdes, Negro nuns or KKK.

The characters quote the scriptures without seeming heavy-handed or contrived. Richard inserts them ingeniously in the situations where they are appropriate and often invaluable. In a high point in the narrative, the Book of Tobit dramatically reveals to Tobiah’s family that  Raphael is an angel. But in Tobit’s Dog, the angel wanders off, seemingly to his next assignment. (Perhaps a sequel?) Of course, the reader can surmise who the angel is, even without familiarity with the Bible, yet it’s so much more fun to know the inside scoop.

My favorite line was when Ace tells Jubal (Sarah’s father, the biblical Raguel) “Perceptions have a way of sneaking up so that people forget what is real is not always what is perceived.” That pretty much sums up Tobit’s Dog as an analogy to the Book of Tobit.

Deliverance, with the routing of evil spirits, is gracefully intertwined in the plot as the hero Tobias rescues Sarah from shame and oppression inflicted on her by “the curse.” The means of deliverance follows the Bible with another method skillfully added later  in a surprising but believable way in the healing of Tobiah’s eyes.

Richard cleverly uses the point of view of Okra, the feral dog with Egyptian eyes, for much of the story. This is effective in setting the scenes as Okra sniffs about, alerts Tobit and Tobiah to dangers and suffers in his obedience. This treatment of Okra gives some credence to those scripture scholars who pose the question of whether the biblical dog is another angel sent to protect the family. I expect animal lovers will read much into Okra’s role and all readers left wondering a little about his role in both books. A delightful story!