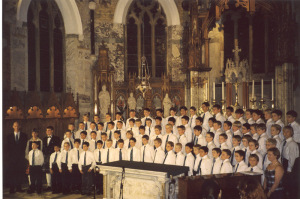 I'm such an admirer of Gregorian Chant! Those not familiar with it are truly missing an opportunity for a calming solace.

Here's how it came about. In the three centuries following the death of Saint Benedict, there emerged in the Western Church a marvelously unified tradition of liturgical music known as Gregorian Chant, taking its name from the sixth century Pope Saint Gregory the Great, who did much to promote the use of the chant.

Gregorian Chant conveys the sacred to the secular. "Contrary to the agitating sounds of hip hop, hard rock and heavy metal, Gregorian chant is instead a soothing balm for weary souls and a source of comfort for unsettled hearts. Inspiring and edifying, simple and poignant, this music of paradise slows our racing minds, renews our vigor, and eases the tensions of a harried world. It ethereal quality elevates us from the temporal and transports us to the spiritual." Judy Keane, The Catholic Exchange

Gregorian chant involves the early Christian liturgical music that originated in medieval times and forms the roots of Western classical music. Consisting solely of melody, the chants are sung unaccompanied and generally by small choral groups--and through the ages have continuously supplied listeners of all circumstances with a soothing sense of solace.

The chant is even being taught in some school programs. Check out: Gregorian Chant for Church and School By Sister Mary Antonine Goodchild, O.P., Rosary College, River Forest, Illinois

"The kind of singing that we do calms the spirit and helps us live in peace with our world and with one another," says Abbot Philip Lawrence, a scholar of chant who also leads the Monastery of Christ In The Desert - home to an American order of Benedictine monks from Abiquiu, New Mexico. "Chanting has some strange effect on the brain waves according to various studies," continues Abbot Philip, but this effect is certainly not the Monks of the Desert's objective; rather their goal, and that of Gregorian chant, notes Abbot Philip, is "to focus on the words rather than the challenge of voice production or sight reading. It is always our hope that our singing will bring others to peace, inner tranquility and an appreciation of beauty. These values can help create a world in which peace and tranquility prevail."

So, close your eyes and listen. Enjoy a few moments of peace and tranquility.