Sacra Liturgia 2013 was an international conference to study, promote, and renew appreciation for the liturgical formation and celebration took place in Rome at the Pontifical University, Santa Croce. 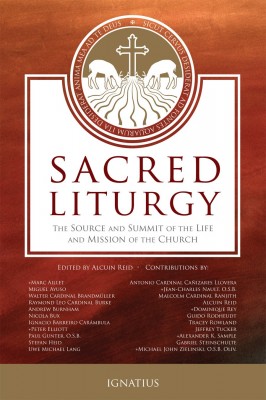 The proceedings of that conference are recorded in the book Sacred Liturgy: The Source and Summit of the Life and Mission of the Church. The speakers included monks, abbots, priests, bishops, and cardinals. There were approximately twenty topics discussed including the Defence of Human Life, the New Evangelization, and Sacred Liturgy as the Foundation of Religious Life, to name a few.

The book begins by saying,

"The Sacred Liturgy is not a hobby for specialists. It is central to all our endeavors as disciples of Jesus Christ. This profound reality cannot be overemphasized. We must recognize the primacy of grace in our Christian life and work, and we must respect the reality that in this life the optimal encounter with Christ is in the Sacred Liturgy."

This is a very true statement, but looking at the book, the amount of topics, and the depth with which they dive, it is easy for the laity to be intimidated. I won't dive into all the topics, but briefly touch on a few that spoke to me.

Chapter 3 on ars celebrandi or the art of celebrating was an interesting read. In addition to talking about celebrating the Mass, Bishop Elliott also gave suggestions for both forms of the Roman Rites and some problems in the Mass. He also discusses what we can learn from the Eastern Churches, including some ways their Divine Liturgy is better than the Mass, i.e., the flow of continuity that makes their Liturgy feel like one action and not a series of separate and unlike actions.

Chapter 4 talked about the early Christian altar and it's impact on today. I'm not really sure why, but I just found this chapter fascinating. Msgr. Heid talks about the idea and reform of Norma Patrum or the standard of the Church Fathers. I love the Church Fathers, but Msgr. Heid explains how it is problematic to rely on them solely as altars were different from region to region.

This book is no easy read. Though the opening words says that the Sacred Liturgy is for everyone, this book is more aimed at the scholar than the average layperson. There were times I wondered if I could hold my breath long enough to get to their level of depth.

What I really appreciated was that they included the homilies that were given over this weekend. I believe they were equally as important to this conference as were the actual lectures given.

Though some of this material went over my head, I walked away from this book feeling more educated on the topic of the Liturgy. If you have an interest in the Liturgy, then this is a book you'll want to read.