Fr. Barron's New Word On Fire Website Is A "Game-Changer"

Editor's note: Today, we're sending prayers and wishes of congratulations to Father Robert Barron and all of our friends on the Word On Fire team as they launch their fabulous new WordOnFire.org website. Lisa 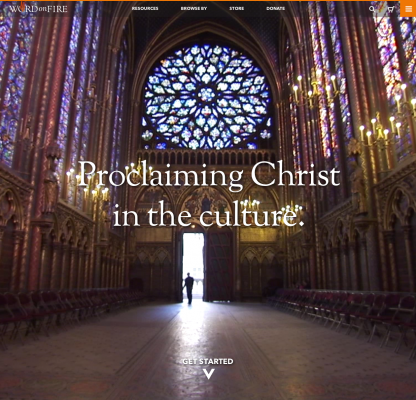 Father Robert Barron describes revamped WordOnFire.org as “a real game-changer” for the Church

CHICAGO August 19, 2014 – When Father Robert Barron founded Word on Fire Catholic Ministries in 2000 and launched WordOnFire.org, the goal was simple: to share his homilies online.

“I liked the idea of sending my homilies to a wider audience, all over the world. The new media provided a means to make that possible in a way that evangelists throughout history would have given their right arms for. But I had no idea how quickly this ministry would grow.”

Over the next several years, Father Barron added YouTube commentaries, weekly articles, and daily blog posts. Soon, WordOnFire.org became one of the most popular Catholic websites in the world, drawing over 1.3 million unique visitors per year.

“We knew our website was helping people. But we also knew the Internet was evolving. Mobile devices were on the rise and new trends in web design pushed us forward. We decided it was time to revamp our website and create something new and innovative.”

Working with AM Design, an award-winning development studio based in Texas, the Word on Fire team spent a year researching and planning. Together they produced a beautiful and elegant website loaded with custom features. For example, the homepage features a full screen video background, which randomly rotates on each visit, displaying clips from Father Barron’s CATHOLICISM series. The team also improved the site’s navigation.

“I’m particularly excited about the tagging,” explains Father Barron, “On the old website, it was hard to find what you needed. So we spent hundreds of hours reviewing all my past content, carefully tagging each resource. Now, you can look up a favorite topic, a verse in the Bible, a paragraph in the Catechism, or a week in the liturgical calendar and find all the content I’ve ever produced on it. This is a real game-changer for the Church. There’s nothing like it in the Catholic online world.”

These new features will prove extremely helpful to priests and seminarians as they prepare their homilies, and they’ll equip ordinary Catholics to grow and spread their faith.

A video trailer for the website (http://youtu.be/luI0fvEjZ5s), produced by Spirit Juice Studios, highlights other exciting features.

“The new WordOnFire.org is mobile responsive,” Father Barron explains in the video. “Roughly 50% of visitors access our website on a phone or tablet. But on the old site, mobile users had a really hard time. They had to pinch and zoom and scroll, just to read the text. The new site dynamically resizes based on your device. That means it looks great on any computer, phone, or tablet.”

Father Barron is quick to note, however, that the upgraded website is not just about improved technology. It serves a far more important function.

“The Church exists to evangelize,” says Father Barron, “and that’s ultimately why our website exists. We revamped our website to serve as a better vehicle for drawing people to Christ, especially those on the religious peripheries, many of whom are online, giving them access to all the gifts that Jesus wants them to enjoy.”

View the video trailer for the website here: http://youtu.be/luI0fvEjZ5s

About Fr. Robert Barron: An acclaimed author, speaker, and theologian, Father Robert Barron is the founder of Word on Fire Catholic Ministries, a global, non-profit media group. He is also Rector of Mundelein Seminary/University of Saint Mary of the Lake near Chicago.

Father Barron is perhaps best known for creating and hosting the CATHOLICISM film series, an epic ten-part documentary on the life and teachings of the Catholic Church. The series was broadcast nationally on PBS and has been seen by millions worldwide.

Ordained a priest of the Archdiocese of Chicago in 1986, Fr. Barron has also published numerous books, essays, and DVD programs. He is a frequent commentator on faith and culture for NBC, FOX News, The Chicago Tribune, Our Sunday Visitor, The Catholic Herald in London, The Washington Post, CNN and The Catholic New World. He lectures extensively in the United States and abroad, including the Pontifical North American College at the Vatican and the Pontifical University of St. Thomas Aquinas in Rome. Fr. Barron received a Master's Degree in Philosophy from the Catholic University of America and a doctorate in Sacred Theology from the Institut Catholique de Paris. Cardinal Francis George, archbishop of Chicago, has called Father Barron “one of the Church's best messengers.”

About Word On Fire: Word on Fire Catholic Ministries (http://www.WordOnFire.org), Father Barron’s media evangelization ministry based in Skokie, Illinois, reaches millions of people through its films, study programs, and online work. With over 400,000 social media subscribers and an extensive collection of over 3,000 free digital resources, Word on Fire is on the vanguard of Catholic new media.