On April 27, 2014, Divine Mercy Sunday, Pope Francis canonized two of his predecessors - Pope John XXIII and Pope John Paul II. There was great rejoicing in the Church on this day, and many publishers released various books on the two newest saints.

Pauline Books and Media, for example, released a book on each that contained excerpts from their writings. Pope John Paul II's was called Be Not Afraid and Pope John XXIII's was called Secret to Happiness.

Ignatius Press, however, raised the stakes and released DVDs on these two great men, called The Revolution of John XXIII: The Second Vatican Council and John Paul II: I Kept Looking for You. Today, I have the pleasure of sharing with you my thoughts on both of them. 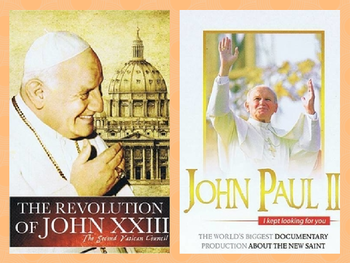 Pope John XXIII was never meant to be a game-changer. He was elected to the Papal throne on October 28, 1958. This was shortly before his 77th birthday. Many thought of him as a placeholder or caretaker pope. They had hopes he would have a short reign and would just keep the Catholic Church afloat during a tumultuous time in the world. Much to everyone's surprise, he called for an ecumenical council, known as The Second Vatican Council, that would transform the Catholic Church into what we know it as today. 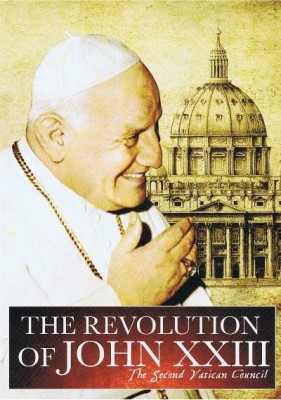 The Revolution of John XXIII is a 55-minute documentary that covers this man and the Council he called. The main aim of Vatican II was to improve the relationship between the Church and the modern world. He wanted to "throw open the windows of the church and let the fresh air of the spirit blow through." During this Council, he grew ill and died, so a new pope, Paul VI, had to be elected, and he is the one who saw the Council through to the end.

The format of this DVD documentary is primarily interviews and commentary. The interviews consist mainly of Cardinals who were present for some or all of the Vatican II councils. The four Cardinals featured most prominently are Julian Herranz, Georges Marie Cottier, Paul Poupard, and the only name I recognized, Frances Arinze.

The Cardinals speak in their native tongue, so there is a voice-over that translates what they are saying, which might or might not distract you. It is fascinating to hear first hand insights from people who were actually there at the last Council the Catholic Church held.

The commentary focused on key figures during the Council, most notably Joseph Ratzinger (future Pope Benedict XVI), and the documents that were unanimously declared, like Lumen Gentium. What was even more remarkable was all the old footage that was presented on this DVD. The Vatican Library is truly a treasure whose depth knows no end.

For someone who wasn't alive for Vatican II, I found this documentary to be a good introduction. I have always been somewhat intrigued by Vatican II, but have never taken the time to read through the official constitutions. I now feel a bit more inspired to seek out information on it and learn more about a Council whose consequences we are still seeing today. The only thing I wish would have been different about this DVD is that it would have been longer and that they could have had Pope Emeritus Benedict XVI interviewed. However, the latter is an unrealistic pipe dream of an avid Pope Benedict supporter. 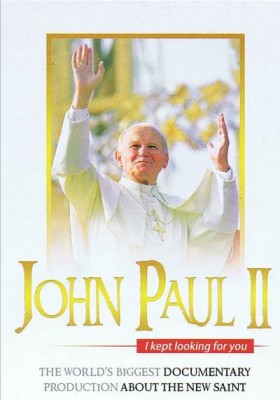 The film then discusses the personality of Pope John Paul II. It talks about his outgoing nature, welcoming attitude to the youth, and the way he went off the cuff with a lot of events. It sounds a lot like many of the things we read daily about Pope Francis, so it was nice that this documentary pointed out that Pope Francis, while awesome, isn't the first pope to show such a love for his flock. We then see a great deal of focus on Our Lady of Guadalupe. The reason for this is because John Paul II beatified Juan Diego in 1990 and canonized him in 2002. He also visited the shrine of Our Lady of Guadalupe on his first journey outside Italy.

I think the most fascinating part of this documentary was the wide array of people that they interviewed for this film. In addition to Cardinals Frances Arinze and Stanislaw Dziwisz (Pope John Paul II's longtime personal secretary and friend), there was a politician, journalist, the Dalai Lama, singer Placido Domingo, and the former Polish President Lech Walesa. This shows the broad reach and effect that John Paul II's papacy had on people from all faiths and walks of life. This was an amazing documentary that was shot in 14 different countries, and I'm amazed that it was only 92 minutes long, or short I should say. I plan to show it to my children when they are older, because even though they were not alive for this great man's reign, I want them to know about him.