The Annunciation: A Novel Inspired by a Masterpiece

Editor's note: Today, we welcome guest contributor Ron Teachout. I recently had the opportunity to meet Ron in person at the Catholic Writers Guild conference and strongly recommend his debut novel, The Annunciation. Lisa 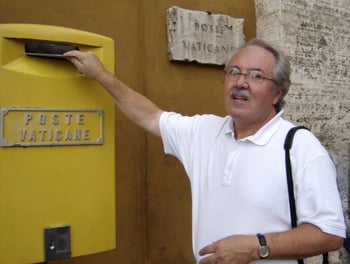 Ron Teachworth at the Vatican

My first visit to Florence in 2000 was a family trip and like most Americans traveling abroad, I clutched my “Lonely Planet” guide book with both hands knowing we were in the city for only three days, one of which would be a pack and travel day. We stayed blocks away from the Piazza Duomo and used the recommendations from the hotel concierge as a lifeline to the various sites we would visit; The Galleria delgli Uffizi, Ponte Vecchio, Galleria dell’Accademia, and the Piazzale Michelangelo.  With three children in tow, it was hectic, as our youngest child was still in diapers. Thinking back, my introduction to Florence was a colorful artistic blur, but enough to know I needed to return.

Fast forward to 2005, I was able to view Florentine artist Fra Angelico’s work at the Metropolitan Museum of Art in New York City. I was impressed by the pious treatment of his subjects and technical sophistication in his paintings. During several subsequent visits to Florence, I visited San Marco Convent’s Museum, home of many frescoes by this revered artist. Each time I was overwhelmed anew, particularly by The Annunciation, his most famous and enduring image that seem to force me to set the stage for a novel. While I identify myself first as a painter, writing inadvertently, had become a part of my life. I wrote a screenplay and directed a feature film in 1984 for Vestron Pictures and went on to write an publish a children's story, Two Stones, followed by a collection of short stories, Beyond: A Collection of Metaphysical Short Stories. 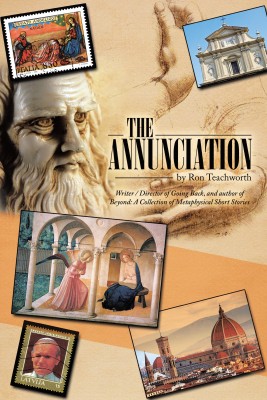 The Annunciation by Ron Teachworth

In the early stages of writing a novel, the amount of research I had to do was tremendous. But I discovered many amazing things as I studied, like the Piagnoni, a group of religious zealots from the 1400s who were followers of Girolamo Savonarola. In the novel, this group reconstitutes itself and plans an assassination plot against the Pope because of what they consider to be radical changes in Catholicism due to Vatican II resolutions. I also learned about the 1438 renovation of San Marco that was commissioned by Cosimo de' Medici. During that time, Fra Angelico was entrusted with the execution of an altarpiece and the decoration of various areas of the convent, from the vast Crucifixion in San Marco’s chapter house to the small frescoes in the cells. To achieve that body of work, he lived at the convent for thirty years, always motivated by his love of God, not financial gain.

By late 2012, the novel started to take shape where the story weaves together several plot lines: an assassination attempt on Pope John Paul II, a lost Leonardo da Vinci mural, an ancient box found in the demolition rubble, and a gentle love story where two students, a Felician Sister, and a Seminarian will test the commitment they made to their Catholic faith. But how could I make what is so vivid and compelling to me come alive for readers who don’t see what I see?  I worked hard to create a story that respects the Catholic faith, while at the same time engages the audience in a modern day thriller. In the end, the ancient history, the Renaissance Art, and Catholicism are all the strands that crystallize in the magnificent setting: The City of Florence.

In 2014, finding Westbow Press, a Division of Thomas Nelson & Zondervan was the final stage in writing a novel. In writing The Annunciation, I have set out to create an engaging story that respects the faith and would be of interest to both secular and non-secular audiences. Westbow Press became the natural fit. To learn more about the book visit http://goo.gl/oydZQP

Learn more about Ron and his writing at www.ronteachworthliterary.com.

Ron Teachworth is a visual artist and writer who writes fiction for young people and adults. Living in Michigan, just north of Detroit in Rochester Hills, Ron is recently retired from college teaching and through his Vicariate, he is involved in a mental health ministry with his wife Jilia. After publishing a collection of short stories, The Annunciation is his debut novel.

Order The Annunciation at Amazon and support CatholicMom.com with your purchase