The Mystery of Submission 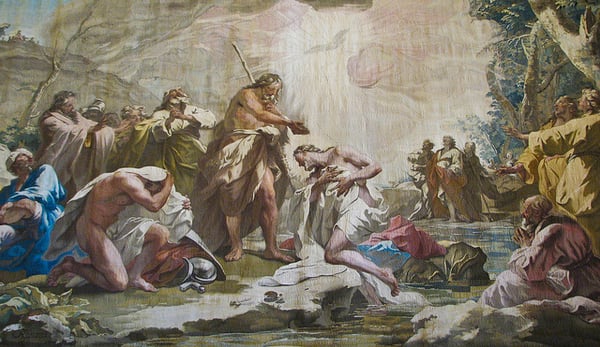 The Baptism of the Lord is the Mystery of Submission: His to our sin, and ours to Him.

The First Luminous Mystery is the baptism of the Lord in the Jordan river.

We all know the story.  John is living in the wilderness wearing camel’s hair and eating locusts and wild honey.  He’s baptizing people in the Jordan and proclaiming the good news of the Messiah, whose sandal strap he is not fit to untie.

Then Jesus came from Galilee to the Jordan to John, to be baptized by him.  John would have prevented him, saying, “I need to be baptized by you, and do you come to me?” But Jesus answered him, “Let it be so now; for thus it is fitting for us to fulfill all righteousness.” Then he consented. (Matt 3:13–15, RSV)

I’ve always found Jesus’ response puzzling.  What does it mean to “fulfill all righteousness,” and how does Jesus’ baptism accomplish it?  I finally found the key in Fire of Mercy, Erasmo Leiva-Merikakis’ extended meditation on the gospel of Matthew.

Consider John the Baptist.  He is the cousin of Jesus, consecrated by him to his service in his mother’s womb.  He is the last and greatest of the line of the Old Testament prophets, chosen by Christ himself to be his forerunner and prepare his way.  He is a man of great holiness, vision, and understanding, a man who knows just what is due to the God of Abraham and Isaac and Jacob.  He is a man who would rather die than profane the holy things of God.

And on this day, the Messiah comes to him, the very Holy One of God.  And what does Jesus say? “Baptize me.”

John recoils, and with reason.  How can this be?

Consider the baptism of John.  John preached repentance of sins; and those who heard and believed came to him and repented, and he baptized them, washing them clean.  The baptism of John is a symbol of repentance, which is at once a recognition of sin and a resolve to do better.

Jesus says, “Baptize me.” The perfect sinless Holy One of God says, “You, my prophet, I want you to declare me a sinner.  I want you to publicly declare me in need of repentance before all of this assembled crowd.”

And John recoils, as he would have recoiled if someone had suggested that he profane the Ark of the Covenant or spit on the Torah.  He has lived his whole life proclaiming the holiness of the coming Holy One; and now that Holy One says, “Profane me.  Lay your hands on me, and baptize me, and declare me unholy.”

John says, quite reasonably, “Lord, isn’t this backwards?  You should be baptizing me.  The other way around doesn’t make any sense.”

And now it comes:  Jesus says, “Let it be so now; for thus it is fitting for us to fulfill all righteousness.”

Jesus says, in effect, “Yes, you are right: for you to baptize me seems backwards, seems a profanation, seems an unrighteous act.  But let me assure you: what seems is not always what is.  Though you do not understand, still you will do rightly if you do as I say, and all righteousness will be fulfilled.”

And John consents; and baptizes Jesus.

And at that moment, according to Erasmo Leiva-Merikakis (whose analysis I am barely doing justice to), Jesus begins to identify Himself with all mankind, and to take upon himself the sins of the world.  The process that ends on Calvary begins on the bank of the Jordan.

John trusted in Christ, and submitted to His will; and all was made well.

John submitted his will to that of Christ.  What things are you hanging on to that you need to give over to Him?