Welcome to our virtual book club! We're reading Fr. James Martin’s bestseller, Jesus: A Pilgrimage. Each week we will tackle a chapter and look forward to a lively discussion together. 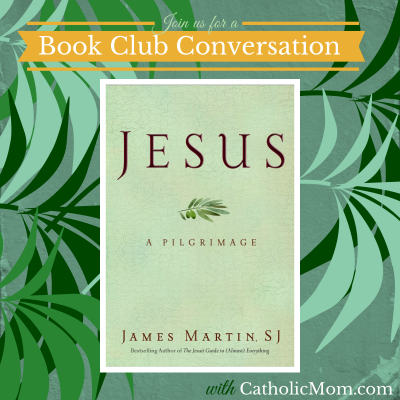 I was excited when I realized I would be commenting on chapter 18. The raising of Lazarus from St. John’s gospel is one of my favorite stories in the Bible (along with The Prodigal Son). I was surprised that Father Jim preferred the synoptic gospels over John because of their faster pace; I love how John lingers over his stories. Instead of quick vignettes, John tells stories with fleshed-out characters. He also gives us insight into lesser known facts about Jesus; Father Jim points that out in indicating that we forget that Jesus had friends. Martha, Mary and Lazarus were very close friends.

John does a wonderful job of fleshing out Martha and Mary; they are not two-dimensional women (Martha as all action and lesser faith, and Mary as all contemplative with greater faith). The first time we meet Martha she is indeed all action and resentful of her duties definitely because Mary was not helping out but perhaps too because she did not feel she had the luxury of sitting at the Lord’s feet and listening. It must have stung to hear Jesus gently chiding her for not understanding what was more important. It’s a great illustration of the Two Great Commandments: first love God and then love neighbor. Mary had the commandments in the right order whereas Martha had them reversed. How many of us have done that? John spells out clearly the results of following those commandments just Jesus laid them out versus reversing the order.

Martha, however, redeems herself. When word is sent to Jesus about Lazarus’ grave illness and he finally arrives, it is she who goes out to meet him:

“When Martha hears that Jesus has finally come, she leaves her sister behind and rushes to meet him.”

Martha is still all action but somewhere along the way, the message of Jesus’ teachings have sunken in. While she challenges Jesus (“‘Lord,’ she says upon meeting him, ‘if you had been here, my brother would not have died.’”) she also realizes his potential (“Then Martha softens. ‘But even know,’ she says, ‘I know that God will give you whatever you ask of him.’”). Father Jim compares her to Peter, “a strong, impetuous, and outspoken friend of Jesus, who believes even as she feels free to question.”

I agree with Father Jim that Martha is a fascinating figure. John gives us a real woman who struggled, questioned and ultimately believed. She was brutally honest with Jesus; she was her authentic self. She is a wonderful example of how we all should be with our Lord. He knows us through and through; there is nothing we can say or do which will surprise him. Yet he wants to hear it from us. He wants us to say it, out loud, directly to him. Even if we’re confused. Even if we are angry.

Some of us may have been taught that expressing anger at God is somehow sinful. I believe that Martha shows us that honest emotions, even negative ones, are not sinful so long as we continue to recognize who we are talking to. Father Jim writes,

“Martha’s fierce honesty also reminds us that Jesus included strong women among his circle of friends.”

Jesus' goal was to disturb people. Imagine how upsetting it was when he announced in John 6 that “unless you eat the flesh of the Son of Man and drink his blood, you have no life in you.” Yikes! Father Jim believes that the Cleansing of the Temple, where Jesus in anger cleared out the money changers, along with the raising of Lazarus were the key factors leading to his crucifixion. Along with being a rabble rouser, he was a frightening man who disturbed the Scribes and Pharisees right down to their toes. This was someone who could usurp them from power and they meant to prevent it.

Jesus, however, disturbed in quieter ways as well with The Washing of the Feet as the perfect example. Jesus gave himself in a radical way to the disciples through the simple act of stripping down, then kneeling down before each and every one of them and washing the dirt off their feet with water and a towel. Father Jim writes,

“To the disciples it would have been an unmistakable demonstration of humility, something an inferior would do for a superior.”

Jesus wanted to demonstrate to the disciples the truly radical nature of his brand of love, the love he wanted the disciples to lavish upon others. The first requirement was to be a servant and that meant no job was too lowly. If anything, Jesus raised up the lowly job of washing feet to new heights because of the good it would do for the receiver.

Peter had a hard time understanding. In confusion he objected: certainly his Lord would not wash his feet! This action by Jesus moved him out of his comfort zone, precisely what the Lord intended. Father Jim offered a reflection of a painting done by Ford Madox Brown who painted “Jesus Washing Peter’s Feet” (painted between 1852 and 1856). Father describes Peter’s expression as interpreted by the artist:

“The look on Peter’s face perfectly illustrates the Gospel: at once embarrassed, downcast, and uncomfortable.”

Uncomfortable. Just the response Jesus wanted from Peter. It is uncomfortable to love in the radical fashion that Jesus requires of us as his followers.
Anyone who has cared for an aging parent is familiar with this feeling. When my mother deteriorated to the point where she needed help with the most basic of bodily functions, I knew what that uncomfortable feeling was like. It was an interesting dynamic of parent and child with the child becoming the caregiver when once the parent had been the one taking care of those basic bodily functions. It was a  lot to process but in the end, the love for my mother required that I care for her in this way. This is the radical love of Jesus.

Next week, we'll cover Chapter 20: Gethsemane and Chapter 21: Golgotha. For the complete reading schedule and information about our Book Club, visit the Jesus Book Club page.