A Little Forgiveness Goes a Long Way with Kids

Editor's note: Today, we welcome guest contributor Nicole Lataif as part of a three week "back to school" partnership with our friends at Pauline Books & Media. Be sure to check out Nicole's fabulous children's books for your family. I know you'll love them! Lisa

A Little Forgiveness Goes a Long Way with Kids 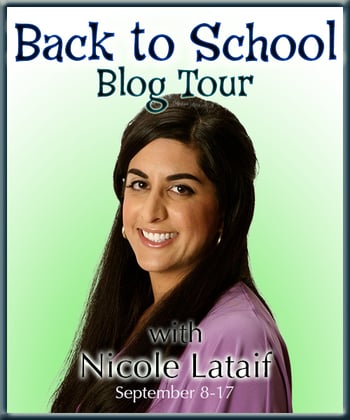 Remember the days before children, laundry, school schedules, and everyday life, when it was just you and your soon-to-be spouse happily planning your upcoming nuptials? That is the life-moment I find myself in as I am writing this post, reflecting on something I never thought I would be dealing with while planning this special day—forgiveness and its importance in our lives (now and in the future).

In the past year since I wrote and published a children’s book on forgiveness, I have been tested on this topic more than ever before. I have had to forgive and be forgiven.

But, not forgive as in, “I forgive you for calling me at three a.m. “

And not be forgiven as in, “Please forgive me for spilling coffee on your shirt five minutes before your interview.”

I’m talking BIG forgiveness. I needed to forgive and be forgiven in BIG ways.

Then, it struck me. Everything BIG was once small (or is made up of smaller pieces—atoms, anyone?). In order to learn BIG forgiveness, relationships need moments of smaller forgiveness.

As a child, my brother and I used to fight like cats and dogs. After one fight, my attorney-father decided to put us “on trial.” I was five years old and my brother was three. I distinctly remember the incident. My brother walked into the basement, trampled on my building-block castle (that I spent HOURS building), and walked away. I was devastated! My father set up a camcorder (remember those?), positioned us on opposite sides of a table, and asked us questions from behind the lens. “Nicole, what happened?” was his first question. I said, “I was downstairs playing blocks. Then, he came down and messed them up! “My dad turned to my brother, “Larry, is that what happened?” My brother nodded yes. My dad then said to me, “Nicole, that makes you the victim.” I asked, “What’s a victim?” My dad responded, “A victim is someone who has been wronged. That means Larry did something wrong to you. What do you think his punishment should be?” I responded, “I decide?” My dad responded, “Yup.” I excitedly clarified, “I get to decide????” My dad repeated, “Yup.” I felt empowered! I wanted to suggest that Larry go to his room for a whole hour! Instead, I remember lessening the punishment out of mercy. I went over to my brother, gave him a hug, patted him on the back, and said, “I think he should go to his room for half an hour, not a whole hour, just half an hour.” Well, my brother promptly rejected that punishment and we started fighting again, and that’s when the camera shut off. 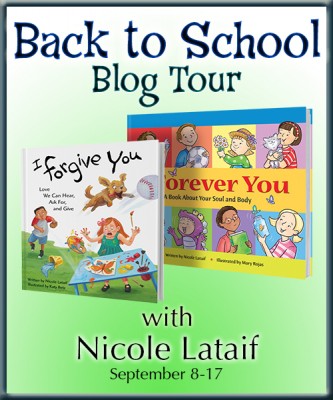 Kids begin to understand forgiveness, justice and mercy at an early age. I didn’t want my brother to be punished more than was fair. I remember feeling badly for him and ultimately disliking the idea that I had to punish him. Kids go through tiffs that seem like BIG deals to them. Those are teachable moments.

As moms, you have the tools to help a child grow in the capacity for BIG forgiveness. So, what can you do?

The biggest thing you can do is be an example to your kids now. Be willing to say you are sorry and teach your child to respond with, “I forgive you.” Work with kids through their tough moments of hurt feelings and help them to understand that forgiveness may take time. Pray about forgiveness with your kids: they won’t give up if you help them find the words to say. Discuss the difference between a friend and a bully by teaching kids how to forgive from afar and pray for abusers. Read up on forgiveness to get a sense of what’s ahead. This book for kids also does much of the legwork for you, taking them through forgiveness step by step.

So, what does BIG forgiveness look like? Last Wednesday, two half-brothers, Leon Brown and Henry McCollum, walked out of prison after DNA evidence implicated someone else in a heinous crime…committed thirty years ago! These men had spent THIRTY YEARS wrongfully imprisoned, and one of them was on death row!

McCollum’s first words after being released stunned me to tears: “…I just thank God that I am out of this place. There's no anger in my heart. I forgive those people and stuff. But I don't like what they done (sic) to me and my brother because they took thirty years away from me for no reason. But I don't hate them. I don't hate them one bit."

Whoa. That’s all I said after I read his statement.

Whoa because that is BIG forgiveness. Whoa because surviving in jail for thirty years is strength, but forgiving, especially in this case, is divine. “To err is human; to forgive, divine.” –Alexander Pope

I immediately realized that although this man is not educated by the world’s standards, he is a giant of forgiveness. What a testimony to others!

If you start laying the bricks of forgiveness in your children’s hearts today, you will help to build a culture of forgiveness, one small step at a time.

About the Author - Nicole Lataif is the Founder and Editor of KidsFaithGarden.com and Author of the 2013 Catholic Press Association Award and 2013 Christopher Award winning book Forever You: A Book About Your Soul and Body, published by Pauline Books and Media. Forever You is also available in Spanish as Siempre Tu. Her second book, I Forgive You: Love We Can Hear, Ask For and Give teaches kids 4-8 what forgiveness is all about. Nicole is available for speaking engagements, school visits, interviews, and guest blogging. Media inquires may be sent to admin@kidsfaithgarden.com.