Harbor in the Tempest: Making Prayer in the Family Work and Making Your Home into a Domestic Church 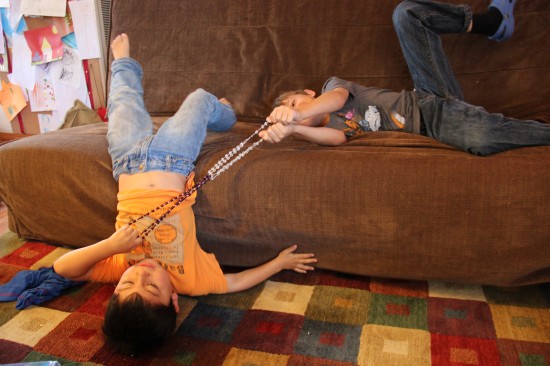 When it comes to prayer in the family, we'd all like our prayer time to be blissfully easy and happy. We imagine everyone willingly coming together each evening in peace to pray deeply, loving God and loving one another, as our perfectly behaved children lead an entire Rosary, sing songs of praise to God, kiss us on the cheek, hug one another, and then rush off to the bathroom, because they can't wait floss and fall immediately asleep.

Isn't that how it always works out?

Well, don't worry if prayer at home doesn't mimic heaven, because while the family is the most important prayer group, it is also the most difficult of all. God doesn't expect our family prayer group to be perfect, but he expects us to try. As Mother Theresa of Calcutta said, “God has not called me to be successful; He has called me to be faithful."

You've probably heard the saying, "A family that prays together stays together." Well, it's true. Prayer is the most important thing a family could ever do. It heals differences, melts resentments, solves problems, gives answers, and brings peace and love back into the hearts of everyone.

Prayer is the glue that keeps a family together, helps it pass through rough waters without drowning, and prevents terrible problems from ever starting in the first place. Please know that you cannot expect the Spirit of God to rush into the heart of your family, unless he's invited in. The Holy Spirit doesn't usually come unbidden. But God is always knocking, and it is through prayer that he bursts open the doors and windows of your home.

In order for a family prayer group to work, the spiritual environment of the home must be conducive to inviting God in. In order to successfully pray the Rosary before bed, dive into a Scripture passage, read a holy book, enact a Gospel scene, learn from a Catholic video or song, celebrate a feast day with a special meal, or benefit from whatever form of prayer you have chosen to implement, your home must be a domestic church.

Create a living space that is healing and full of God's love and light. Look out for anything in your home that might take the minds and hearts of your family away from the Lord. There are so many things like this in society now that creep into our homes and our families. Certain music and noise can take us way from God, not to mention the absence of silence. Many T.V. shows, movies, video games, magazines, books, board games, card games, internet sites, posters, need to be thrown out.

Be aware of anything related to the New Age, and with kids, anything that deals with so called "powers." If a power doesn't come from God, then it comes from the evil one—plain and simple. No other supernatural powers exist in this world. Even things that seem benign, like Harry Potter books or Pokemon cards, have bad spirits around them. It was reported in Retail Trends, published in 2004, that interest in witchcraft materials, such as how to cast spells on people, has increased over 200%, since the release of the Harry Potter books. And witchcraft is something quite real and quite dangerous.

Don't go overboard and prevent your kid from dressing up as Superman, because Superman can fly, but be aware that some objects can have spirits associated with them. Now this may sound cuckoo, but think of it this way. Why would the spiritual world not be interested in something that can lead us toward God, or conversely, in something that can steer us away?

To give you an example of this, one day I was telling my husband that there are bad spirits attached to video games, which invite us to waste our time, get addicted to them, and increase violent thoughts and behavior. Well, he thought I was an overzealous Christian nutcase just nagging him and making no sense.

"Yeah, yeah, yeah," he said. I think he'd had it with me. We'd already stopped watching T.V., except for videos, and now here I was, this church lady in his own home, saying he couldn't play video games, and this was too much for him.

One day, when I wasn't home, he sat down in front of the computer, looking forward to a good time fighting space aliens. Before I mention what happened next, I should let you know that my husband is not a superstitious man, prone to fear or hallucinations. He's a guys' guy, a real pragmatist, a man none too interested in spiritual realities, and he isn't one to run away from anything.

So he plopped down at the computer, happy to have his time blasting alien invaders, and halfway through the video game, a dark swirling presence came to visit him and envelope him. It became so oppressive that he literally ran out of the house, terrified, in order to escape from it.

I don't think this was just coincidence, because I had been praying the Rosary, asking God reveal to my husband the spirits that hang out with video games.

The music we listen to, the things we read, the media we see, has a profound effect on all of us. To note: there is a Catholic version of Netflicks, where you can get good Catholic videos for the family. See Piusmedia.com. The media shapes us. When one of my boys watched a power ranger show, he started kicking my shins right afterwards. When he watched a Piusmedia video on Saint Pio, he ran to get his holy cards and wanted to pray.

A recent study, published in Psychological Science, a journal of the Association for Psychological Science, found that teens who watch sexual content in movies have sex earlier, have more partners, and engage in riskier behaviors, which has a lasting influence on risky sexual behaviors in adulthood. In the study, which was funded by the National Institutes of Health, the researchers concluded:

In other words, allowing a middle schooler to watch sex on the big screen is like allowing a toddler to ride in the front seat with no seatbelt, standing up, at rush hour. Let's step back and evaluate what we're exposing our kids to. What we read, or don't read, for instance, can change the course of your and your children's lives. St. Pio once said,

The harm that comes to souls from the lack of reading holy books makes me shudder. . .What power spiritual reading has to lead to a change of course, and to make even worldly people enter into the way of perfection.

A seemingly innocuous book, lying on a coffee table, can harm a soul or save a soul. An acquaintance of mine who became a sex addict said it all started when he was just age three and found his dad's playboy magazine. When I received a specific calling from the Lord to write my book called Full of Grace: Miraculous Stories of Healing and Conversion through Mary's Intercession, God told me the book would help save souls, but I had no idea, at the time, of the power it would have. Since the book has been out, I've received testimony after testimony of how the it has healed people's souls or brought people back to, or into, the Catholic Church. Think of what you and your family could gain by reading many holy books.

One of the greatest dark shadows standing tall in almost every American home is a television. You might get mad at me for saying this, but if you ask Jesus, I bet you He'll tell you that most of what is on T.V. and travels automatically into the minds and hearts families is BAD. How many of us, when we come to the end of our lives, are going to say, "Oh darn it! I knew I did something wrong! If only we had watched more T.V. What was I thinking?"

If you haven't realized it yet, please be aware of the unfortunate fact that we're living in a day and age when evil, disguised as light, has simply become a natural part of our culture. GET RID OF YOUR T.V., or at least, reduce its influence. You can work so hard at shaping the minds and hearts of your children, and then suddenly all your hard work can be whisked away by the media.

So, if something is in your life or in your home that is not of God, and you have any say in the matter, throw it out. By the way, I don't mean your spouse or your kids. Have your home blessed and fill it with blessed objects. Bring in the light! Put up holy images. Have a Bible on display—one that you actually read [wink]. Put up crucifixes, images of what might await us in heaven, and anything that draws you toward the light, so that when you walk into your room or house, your soul is flooded with the Holy Spirit, and when it comes time for your family to pray, the very atmosphere reminds you of God.