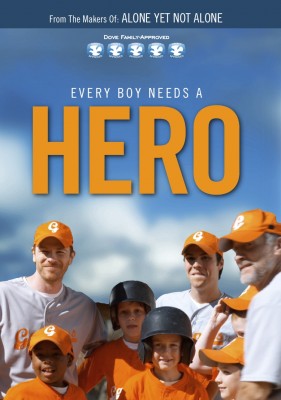 Hero tells the story of a father trying to find his way back into his family after leaving when they needed him the most. The death of his wife calls him home at the same time his son is thinking of no longer coaching the little league team. The father, Joe Finch, had coached the team during the time they became champions and his son was on the team.

Baseball has become more of a game for fun, instead of working together in order to win. The boys' fathers no longer have a strong place in their lives and baseball. Joe Finch sends home a form to bring back the purpose of fatherhood in baseball. He asks that the fathers come to games and practices along with practicing at home with their sons. The boys had attitudes and lack of self-esteem due to the absence of their fathers.

Faith is mentioned briefly at times. Church is more of a background component. Families being the heart and foundation of society is the main focus. Fathers and their irreplaceable position given to them alone is what the movie is truly trying to get across.

In the end, the fathers find ways to connect with their sons again through baseball. It teaches the fathers to be creative and make time for their sons. Along with the rest of the fathers, Joe Finch finds his way back to his own father and son.

Hero is the perfect movie for families to watch together. The film was released in stores on September 16, 2014. It has a beautiful message of true fatherhood. God is our Father too. Do you hear Him cheering you on to victory?