Conflicts in Faith and Marriage 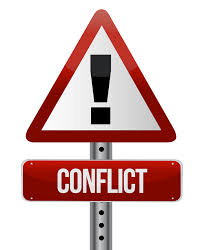 One of the hardest areas of life for many, if not most of us is our handling of conflict. I guess there are people, strangely warped who generate conflict as a process of the life they lead. But for most of us, we’ll do all that we can to minimize or completely avoid conflict. Alas, we live in a broken world, and we are broken creatures who carry the burden of original sin and we live with people who sometimes have it in spades.

On the day that I’m drafting this reflection, I’ve received an email from one of our staunch parishioners. He is very upset that I didn’t take an action to do a particular something in our parish. It’s beside the point that the thing he wanted done is something that the pastor would decide on, and not a deacon. The email suggests that I’ve given in to the relativistic thinking of the modernists of religious society.

I’ve been chided for things that I’ve preached about. Comments ranged from, “your homily was….” too long, too conservative, too ‘cranky,’ too challenging, too ‘old fashioned,’ etc. I smiled when, after a recent weekend homily, a man walking out said, “It was nice to hear something good for a change.” I guess that means the earlier homilies didn’t agree with him. :-)

In earlier years in my diaconate work, I have been involved in doing mixed-faith marriages. Two people of differing faith walks (or one of them with no faith) often bring an ‘edge’ into the beginning of pre-marriage ministry. It does require a bit of the wisdom of Solomon or the help of the Holy Spirit to deal with people who bring the world into the Church rather than entering Church as it truly is: a totally different world.

I’m doing some ministry work right now with a lady who has been married three times. She has come back to the Catholic faith in a new and seemingly strong way. However, her current marriage has lasted two years and is headed for divorce. None of the marriages were done sacramentally in the Church. She wonders why she keeps repeating mistakes over and over.

The late Father Lou Guntzelman once wrote about marriage vows. In his column, Fr. Lou quoted Thomas More: “More saw the personal implication of making a commitment and not keeping it. He said, "To take a vow, is like holding ourselves in our hands, like water; if we open our fingers, then we ought not hope to find ourselves again." Fr. Lou continues: “The first priority in any marriage is working to uphold one's commitment.

“The ideal, of course, is a marriage and commitment that deepens and lasts forever. Yet reality teaches us that not every couple is capable of making a permanent relationship. The Catholic Church keeps extensive marriage records and operates marriage tribunals to encourage marital faithfulness and grant annulments where an important mistake has been made by the couple. The most frequent reason for granting annulments is ‘lack of due discretion’. This means that the necessary psychological factors in one or both parties to permit them to make a commitment or adult-like vow were creditably absent.”

For the dozen couples I’ve worked with doing pre-marriage preparation, most entered with the mindset that it was all about the day and the events of the day. Most didn’t start with thinking so much about all the things that the FOCCUS pre-marriage inventory opens them up to look at. I’ve often told the story about one couple that I was working with. They both were successful and independent, but seemed intent on forming a holy and permanent union. Just eight weeks or so before they were to be married, the bride-to-be went out and bought an expensive antique pool table. She never mentioned it or talked it over with her intended. And guess what? We had previously uncovered several problem areas about money issues and money handling when the results of their pre-marriage inventory came back. Tell me if you don’t think this was an example of arguments and problems waiting to take the couple to counseling years later. The lesson of pre-marriage counseling ought to be how to anticipate, or how to plan for conflict. It’s inevitable.

Life is conflict. Conflict is life. Walking hand in hand with Jesus in the cool of the evening in the garden is for the next life. But preparing for the reality of conflict means anticipating that issues will need to be worked on. Praying for the Holy Spirit’s ‘speedy’ inspiration is a good idea when unexpected conflict arises.

Deciding on the expected outcome of conflict before any talks have started is a recipe for failure. Truly having Jesus as mediator and guide in the relationship will go a long way toward ensuring a loving resolution.

BTW: The ‘preacher’ most often preaches what he needs to hear.