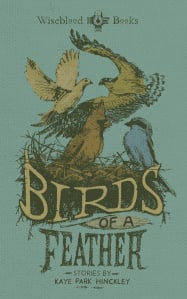 Repetition in our dreams can indicate a similar situation in our waking life. A recurrent dream usually happens when we are not paying attention to something important, so the dream will repeat itself until we finally understand and receive the message.

Here's the example of a character's experience with an important dream---from "Red Bird," the first story in Birds of a Feather, published in July by Wiseblood Books.

Click on the book cover to order the collection of ten stories .

The recurring dream has been with Jude for thirty years, nearly half his life. In it, he’s a boy of six or seven,cornered by an elderly man in a wrinkled linen suit and a white straw hat. The man has caught him in the act of—he doesn't know exactly what, because this is where the dream always begins. It could be a number of things. Jude isn’t sure if the man is friend or enemy. The man never speaks, only passes judgment with his eyes. By now, Jude is used to the dream, to the old man and his quiet condemnation. When the large hand reaches for him, he usually shrinks to nothing then wakes with a sense of accomplishment that he has outsmarted his judge another time. But when he wakes this November morning, he doesn’t remember having dreamed at all. Something different muddles his mind,some confusion he can’t get rid of.

A drizzle of rain, in the rhythm of a heart-beat, taps against his bedroom window. He turns to look, but the corner of the down pillow is flipped up and blocks his vision. He raises a weak hand to pat it down, surprised at how much strength diabetes has stolen from him. The gray sky appears disfigured by an arthritic tree and a cardinal clings to a leafless limb, a red blemish in the drizzling rain. He’s not sure why he shouts, “Get away, red bird.” Fly before you're caught!