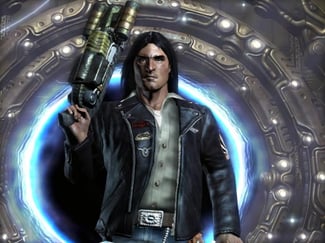 Domasi "Tommy" Tawodi is a Cherokee garage mechanic and former U.S. Army soldier living on a Native American reservation in Oklahoma. Tommy isn't happy with his life, doesn't like his native American heritage, your typical coming of age garbage, which doesn't work here because Tommy is already in his mid-20s. After an idiotic bar fight, the entire building is lifted up into a green light above. Tommy, Jen, and Tommy's grandfather, Enisi, are transported skyward to the massive alien starship called the Sphere. They, along with other captives, are dragged through the Sphere. Tommy is freed in an explosion set off by a stranger who might as well be named MacGuffin.

Tommy sees Enisi's get crushed in an alien device that really makes no sense. While trying to find Jen, he falls from a walkway and lands in an LSD-fever dream that's explained as simply "Cherkoee Magic."

Stop me if you've heard this one.  In fact, feel free to stop reading. This is the part of the game where everying went down hill.  Instead of being the Halo ripoff it so blatantly is, Prey tries to layer the gameplay with "spiritual powers" from his dead grandfather, allowing him to "spirit-walk" through forcefields and operate consoles normally out of reach, complete with a spirit guide.

If you take out the aliens, does anyone else feel like they've heard this premise before?

This game is fairly straightforward.  If you’ve ever played a FPS, these mechanics are downright easy, though not necessarily the tightest game controls ever.  It's okay, but gah, sometimes, it gets annoying.

The AI bad guys are suicidally stupid and will attack you with no skill or ability. The entire alien ship lacks any logic to it. It's all just frustrating.

Music? There was music? Funny, it sounded more like noise.  Okay, yes, the main overture had some good elements to it that sounded like Hans Zimmer on a good day, but other than that? No.

The graphics, however, are dark, making the visuals kind of muddy.

Appropriateness is easy -- adults only.  The casual gruesomeness of how the alien ship ingests its food is more than enough to justify it.

Morals? That depends on whether or not dabbling in Cherokee mysticism is something you want to deal with.

I didn't finish this game. That should tell you something.

I didn't care for the characters, the game, the controls, or the settings. The cliche's were strong with this one, and I didn't like it one bit.

Oh, and it ends with a to be continued, and sequel bait. No, I'm not kidding.  Then again, keep in mind it took 11 years for this game to see the light of day. With luck, the next one will take that long.