Confession of a Tabloid Writer 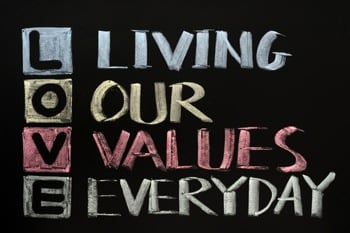 What do O.J. Simpson, the Bachelorette, Charlie Sheen and Angeline Jolie all have in common? The tabloids love them.

On the way to the grocery store check out, one cannot help but notice headlines flashing the latest scandals. If the high point of your day was discovering that cheese was on sale, reading up on the latest celebrity dirt is tempting. After all, it is not like you are sitting around gossiping at the office water cooler or making fun of the pants one of the moms wore to your book club. These people are celebrities so they should expect it, right? In truth, regardless of what they should expect, all that really matters is what God expects of us.

One day, while looking under the “general interest” category for periodicals, I read the entry for a certain tabloid newspaper. Although their cover stories are about famous people, many of the inside articles are about unusual topics or events.

I pitched a few ideas to them and one of their editors called me. He assigned a story to me about a couple that raised wolves. When I called to request an interview over the phone, the couple was not too keen on being in the tabloid. Since I was writing for other reputable newspapers and magazines, I used a fake name so I would not be associated with writing for a gossip paper. I felt like a liar. Still, I proceeded, excited to write for a famous publication that would pay me $500 an article (in 1989 dollars). The next assignment was a story about a woman charged with child abuse who was allowed to count time at a “fat farm” as time served as part of her jail sentence. I spoke with a man at the health spa (aka “fat farm”) who gave me the full scoop. Later, he called me back with second thoughts. “She’s not stable,” he said. “I changed my mind and I don’t want my interview used.”

I called the editor to tell him. He chuckled, “That’s of no significance to us,” he said. I had a dark feeling. I had gone into social work to help people. Writing this story was not going to help anyone—not the woman or her child, and certainly not the man who regretted talking with me. The story ended up getting cancelled due to other reasons but the editor’s words haunted me.

The next article was about a dog that was saved from the gas chambers of an animal shelter and then went on to star in Disney movies. I called people connected to the story using my fake name, and said I’d be looking for a publication to place the story in. I decided mentioning the specific publication wasn’t going to open doors for me. When the article was done, the editor called to tell me he wanted it to be a little more dramatic. “Make it sound like the volunteer who saved him did not know if the dog would be dead or alive by the time she got there,” he said.

“But that’s not what happened,” I told him. We talked for a bit and I agreed to do my best to add more drama. Still, I kept everything truthful. When my story appeared in print, however, it was changed to say that the volunteer drove frantically to the shelter not knowing if the dog was dead or alive. So much for accuracy.

Then, I came across a story I thought the editors would love. Some people who worked at the Custer House in Mandan, ND—the place where General George Custer left before his last stand at the Battle of Little Big Horn—claimed the reconstructed house was haunted. But the appeal of writing for this famous publication was gone. I had begun praying the rosary daily. I was also reading about my Catholic faith and desired to truly live it.

Even if I was completely honest and stayed away from gossip or scandal, I would still be helping a publication that cared more about money than honesty or people. Temptation was then placed squarely in my path one day when the editor called. “Do you have any good leads?” he asked.

I felt the choice before me was to follow God or to turn my back on him for money.

“No,” I said, “I don’t have anything.”   It was the truth. I had nothing more for them anymore. I knew I could not follow my Catholic faith and still write for them. We’d get by without the money.

I am convinced, that by saying “yes” to God and “no” to the gossip publication, God opened another door for me. The opportunity to freelance for Women’s World Magazine magazine fell into my lap within the same week. They paid the exact same amount, and even though it’s a secular women’s magazine, they were wiling to include things in stories like mention of angels and praying to God. I contributed occasional articles to them for the next ten years until I felt inspired to concentrate on writing Catholic books.

My opting out of tabloid writing was an opportunity to choose God over something of far lesser value. And isn’t that the same choice when anyone buys a gossip magazine or newspaper? Instead of reading something spiritual or at least in harmony with God, gossip hurts the reputation of others and also harms our own souls. “An evildoer listens to wicked lips; a liar pays attention to a destructive tongue” (Proverbs 17:4).

Writing for an immoral publication contributes to evil, but so does paying money to read it. Our society has become numb to gossip and it’s treated like a sport. Celebrities are people with souls--children of God. If we hear some sordid news about them, we should send up a prayer and not give our attention to programs or publications that exist to spread scandal as entertainment. Instead, by rejecting evil and choosing God instead, it gives him the opportunity to lead us to something better.

Intercessory Prayer Gets Behind the Wheel
Read
Blessed Pope John-Paul II: Families, Become What You Are
Read
An Unfocused Mind Wastes Your Gifts
Read