Can the Marriage Nullity Process be “Streamlined”?

Today we welcome Paul Matenaer, who was on the Drew Mariani show on Wednesday this week discussing the proposals for streamlining the marriage nullity process. You can listen to Paul and Drew from the Relevant Radio archives (link opens an mp3 file). What follows is an article Paul is sharing with us based on the notes he used for that radio interview. Enjoy! - Sarah 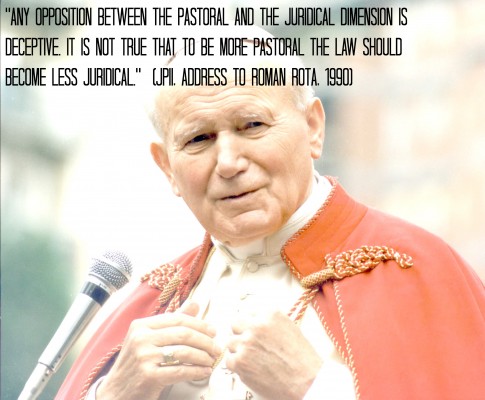 Can the Marriage Nullity Process be “Streamlined”?

Marriage is a covenant, by which a man and a woman establish between themselves a partnership of the whole of life ordered by its very nature to the good of the spouses and the procreation and education of offspring. This union is brought about through the legitimate consent of capable parties, which is an act of the will by which a man and woman mutually give and accept each other in order to establish marriage.

This one-flesh union is indissoluble, as the parties themselves promise in the Rite of Marriage when they state their intention to be together until death. Thus, when a valid marriage bond arises between two baptized persons, it can never be broken, except through the death of one of the spouses, as Christ himself made clear when he said, “what therefore God has joined together, let no man put asunder” (Mt 19:6).

In marriage, a husband and wife are joined in good times and in bad, in sickness and in health, and nothing which occurs after the moment of consent—no matter how grave—can ever dissolve that bond, a bond which is not imposed by the Church but which arises from the free consent of the husband and wife themselves. For this reason, Jesus also says, “Whoever divorces his wife and marries another, commits adultery against her; and if she divorces her husband and marries another, she commits adultery” (Mk 10:11-12).

Consequently, a declaration of nullity—sometimes called “an annulment”—is a judicial decision rendered by an ecclesiastical tribunal that one or both parties did not give adequate consent or were hindered by some impediment in their attempt to contract a valid marriage at the time of consent.

What is the marriage nullity process?

The marriage nullity process is not a process for requesting a favor or for asking the Church allow you to get remarried—as if such a thing were even possible. It is a judicial trial whose goal is to discover the truth about whether or not on the wedding day the indissoluble bond of marriage came into being, or whether because of some impediment or a defect of consent, the attempted marriage was invalid.

In the same way that in the civil realm we are presumed innocent until proven guilty, the Church presumes that all marriages are valid until proven otherwise. The marriage nullity process allows for and encourages the discovery of truth and is the means by which a marriage can be proven invalid.

Can the marriage nullity process change?

Many of the elements of the marriage nullity process are required by natural justice. For example, the tribunal is required to cite or summon the Respondent party—the other spouse in the marriage—to the process because people have a natural right to know that their marriage has been accused of being null, and they have a right to participate in that process.

Another example would be the requirement to bring forward witnesses to corroborate and prove what has been alleged. Can you imagine a civil trial in which no witnesses were used and the allegation of one party were simply deemed to have full proof?

So, there are not too many aspects of the process which could be changed without harming the basic rights of persons. Saint John Paul II said in his 1979 address to the Roman Rota that if the Church is to be persuasive in advocating for fundamental human rights in the world, then she herself must be a speculum iustitiae, or mirror of justice, to the world.

We have to be very careful here and proceed with that in mind. Yet, there are some elements of the process that could be changed, and there have been some proposals to change those aspects. I analyze four possibilities below.

For example, an affirmative decision given in the Diocese of Madison must be confirmed by the appellate tribunal in the Archdiocese of Milwaukee.

However, this requirement does serve a very good purpose, which is a check on the decision of the judges in 1st instance, and when we are talking about something as serious as declaring that a marriage was null, perhaps having that check is not such a bad thing. However, this does take an additional amount of time.

The Code of Canon Law states that ideally the second instance should only take six months, but sometimes in reality it can take much longer. Moreover, perhaps not requiring another tribunal to look at the case would allow the other tribunal more time to focus on their own cases and instruct them properly.

Cardinal Burke feels very strongly that the Church should not do away with this requirement, and as prefect of the Apostolic Signatura, he has a much better idea of what is happening in tribunals around the world, and given the dignity of marriage, it is hard to argue against him on this point.

Proposal #2 – Drop the Requirement that a Definitive Sentence be Written

The very wise canonist and professor Dr. Ed Peters for whom I have the utmost respect has suggested that perhaps the requirement that the judges write a full sentence at the end of the process be dropped. Instead, he wonders whether simply indicating the decision of the judges—whether affirmative or negative—is sufficient.

While I do have some sympathy for this proposal, since writing a 7-10 page sentence can be time consuming, I have to disagree with Dr. Peters for three reasons.

First, I think that people have a natural right to know the reasons in law and in fact for the decision that is given by the judges, especially regarding something as serious as the validity or invalidity of their marriage.

Secondly, I question how the parties can know whether to accept this decision and live their lives accordingly because it is in conformity with the truth or whether to appeal it, if they do not know the reasons for the decision.

Finally, Saint John Paul II in his address to the Roman Rota in 1987 stated that the work of the tribunal is a “service of charity to the parties” so that they might not deceive themselves as to the true causes of the failure of their marriage and may be saved from the risk of finding themselves in the same difficulties in a new union sought as a remedy for the failure of the first. How can this occur without a sentence that clearly explains the decision of the judges?

So, I very humbly and respectfully disagree with Dr. Peters on this matter and point out that even St. Thomas Aquinas got some things wrong.

Proposal #3 – The Use of an Administrative Process

This proposal comes from Cardinal Scola’s article published recently in the theological journal Communio. To summarize, he vaguely proposes the possibility of a “non-judicial process” in which the bishop himself would make a decision about the validity of the marriage.

The process that he outlines, however, is basically the same as the current marriage nullity process. He speaks of bishops or their delegates making a decision after weighing all of the evidence and then getting a written observation from the defender of the bond.

First, it is necessary to point out that bishops already have the power to decide marriage nullity cases! Any bishop at any time can call a specific case to himself, but frankly, I do not know of a single bishop who has the time or the desire to get right in the middle of a messy marriage nullity case. This is why we have judges in the tribunal, who are persons trained in canon law and who are appointed by the bishop to judge cases.

Secondly, if such a process were really to respect the rights of all persons involved, it would have to look an awful lot like the process we already have. At the end of the day, the Church, like any society, needs a legal process to determine if contracts entered into by its members are valid.

In my humble opinion, this is the best solution that has been brought forward. The average diocesan tribunal is understaffed and overworked.

Here is a great example. I am the advocate for a woman Petitioner in another diocese, and I am assisting her in proving the invalidity of her marriage. Her case has been sitting on a desk for six months while she waits for someone in their tribunal to have the time to question her witnesses. Her witnesses are ready, but they are simply waiting because the tribunal has far too many cases for it to handle efficiently. It is a tribunal that is very much understaffed.

If our goal is to “speed up” the marriage nullity process, one way of doing so would be to train more canon lawyers and to bring our tribunals up to full capacity. 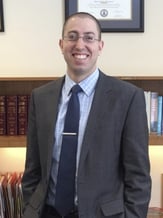 Paul Matenaer is a tribunal judge in the Diocese of Madison, Wisconsin, where he lives with his wife Meg, a CatholicMom.com contributor, and their four children. Paul has served as defender of the bond in the Madison Tribunal in the past and currently serves as a judge there. Besides his work in the Diocese of Madison, Paul also assists Petitioners in other dioceses who seek a declaration of nullity by acting as their canonical advocate—providing canonical advice during the process and arguing on their behalf.