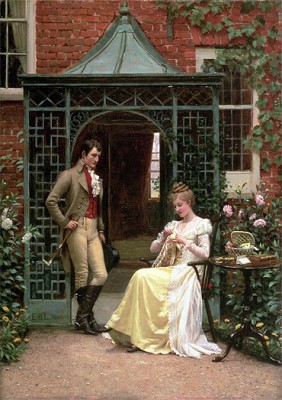 When one of my teaching colleagues retired last year, his longtime aide gave him a moving tribute.  Among other things, she called him a "gentleman."

I heard that word and my writer-mind began to spin.  What exactly is a gentleman?

As an ardent Jane Austen fan, I know what it used to mean.  Once upon a time,  it meant being a member of the land-owning gentry, a man who didn't have to hold a job because he could live off of the rents paid on his estate.

So here, in bullet point format, is my best attempt to unpack the word "gentleman."  See if you agree.

* It's fair to say that a gentleman has a code of ethics.  Gentlemen don't make shady real estate deals or bilk senior citizens out of their life savings.  They don't cheat their way to the top or step out on their wives with exotic dancers named Phantasye.  They're honest and trustworthy.  (That's one of the reasons we all like them.)

*A gentleman is usually courteous.    He's unlikely to give you the finger when you are, in his estimation, going too slow on the freeway.

* We can probably all agree that a gentleman treats women well.  I don't want this to turn into a "should men pay for dinner" or "should men open the doors for ladies" debate (although I will add that my husband exhibited both behaviors on our first date, which made him rocket even higher in my estimation).  But one thing I've come to realize is that seeing women as intellectual equals and acting in a chivalrous manner are not mutually exclusive.  I think modern gentlemen are able to do both.   And, even more importantly, real gentlemen care about women having the chance to be self-actualized.  This isn't just lip service; they really believe it.

*Most gentlemen are also, at their core, gentle.  "Quiet strength" seems to go with the territory.  You just don't find gentlemen flying off the handle or belting people in brawls.

*A gentleman sees the innate human dignity of others, all others.  Remember in Pride and Prejudice, when Elizabeth goes to Darcy's home and hears from the housekeeper about how well he treats all the workers on his estate?  Previously, she had accused him of not being a gentleman, but a testimony like that goes a long way towards altering her initial opinion.  You can be fairly certain you're on a date with a gentleman when he is genuinely and unostentatiously kind to the guy who refills the water glasses.

Looking back over my list, it seems like a pretty daunting description.  Is all this too much to ask?  I'd say yes, except that I happen to have known a fair number of guys throughout my life who actually have these qualities, and who display them most of the time (nobody's perfect).  I hope that twenty years from now, the same will be said of my own little boys, too.  Keeping that end goal in mind is useful when handling the day-to-day decision points of parenting.

And as I wrote this piece, I had a fascinating realization.  My Catholic faith -- the one I was raised in, and which I've chosen again for myself as an adult -- encourages all of the above behaviors.  It seems that if you live a life geared towards aligning yourself with God and loving others, you may find yourself being a gentleman without even thinking about it … and that indeed is good news.

So what would you add to my list?  Are there gentlemen that you know and love in real life, or in fiction?