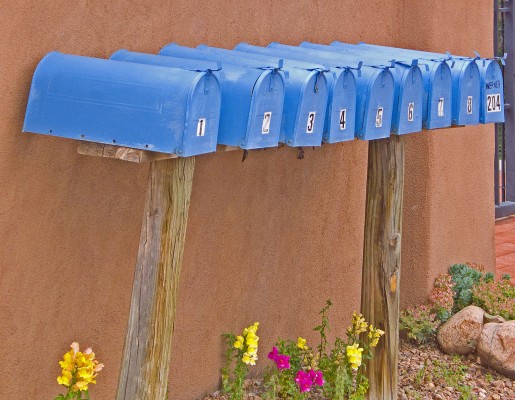 When we were kids, there was a time my Dad ended up taking a job in a distant city.  Mom and Dad weren’t sure what to do about moving the whole family.  There was talk of a possible transfer at the new job to get Dad back to our hometown.  And in our hometown we had family and friends, we were parishioners at a church my grandparents had helped found (the same church where all us kids went for grade school), everyone was doing well, and . . . Well, moving meant uprooting ourselves from a community and life we’d always known and loved.  It was a big step.

But Dad was also doing well in his new job, real well.  He was getting promotions and making a lot of money.

As Mom and Dad hesitated about a move, Dad spent work weeks in the big city living in a boarding house while Mom and us kids were back home, in the same house our family had lived in for nearly 20 years.  Dad came home on weekends, and headed off again for another week at work come Sunday evening.  The pattern continued week after week while the possible transfer continued failing to materialize.

What to do?  Move the family?  Or stay separated, waiting and waiting for the hypothetical transfer to actualize?

During this time, Mom took us kids on a fateful trip to the library.  Outings to the library were always one of our favorites, and we went often.  We were each allowed to check out three books:  one had to be a biography, one had to be a book to learn from (I always picked a history), and the third was up to our own choosing.  And after we were done at the library, if we were lucky (and we often were) Mom stopped at Dainty Made Bakery and let us pick out treats to eat when we got home and laid down on the living room floor to look at our books.  I still remember a lot of those books, like the biography of Leif Erikson with the wonderful pen and ink illustrations, and the history book about Mesopotamia and the “Birth of Civilization Between the Tigris and Euphrates” with its color plates of ziggurats and ancient statues—it’s amazing how those little things stick with you.

But this particular trip to the library took a surprising turn.  While we were there, Mom ran into one of her old high school friends (which in itself wasn’t at all surprising—Mom knew everybody and ran into friends everywhere we went— but what her friend did provided the surprise).

“Jenny!” Mom’s friend said, “What are you doing here?”

“No, not that,” Joanie answered.  “I mean, what are you doing here?” and she gestured widely with her hands, “Why are you still in town?  I thought John took that new job?”

“He did,” Mom said, “but . . .” and she explained her dilemma and reservations about making such a big move.  When Mom finished, her friend exclaimed:  “For Heaven’s sake—move already!  You make it sound like getting sent into exile, it will be a fun adventure in a new place!”

“I don’t know, Joanie,” Mom said.  “I guess I’m just waiting for some kind of a sign to know what the right decision is.”

A few days later, Mom got a most unusual card in the mail.  It had no return address, and when Mom opened it, read as follows: “Hi Jenny, this is God.  It’s time to move!”

Those are the kinds of friends Mom had—fun and zany!

In the end Mom and Dad decided they had waited long enough for the potential transfer, and our family made the big move.  And while we still loved our old hometown (and still do!), life was good in our new home, too.

So my Mom got a letter in the mail from God—sort of.  As signs go, it wasn’t exactly a burning bush—but then, I think that was the real point for Mom:  to be open to God working in our lives through more ordinary means, even something as mundane as a job transfer that doesn’t come through.

At times God dabs the brush of history into the dazzling colors of the extraordinary, but the familiar hues of the everyday are on His palette, too, and God uses both.  There are partings of the waters of vast seas, and then there are regular old rainy days.  There are messages scrawled on the wall in ancient languages by the hand of an angel, and then there are notes that come in the mail from old school chums.

We’re all looking for signs—we want our own burning bushes or voices calling in the night—but sometimes in searching for a wonder, we miss what comes to us in the guise of the everyday.  As Carolyn Arends sang in There You Are:  “I was hoping you would write to me a message in the stars, As if the stars themselves were not enough.”

And sometimes God uses the very things we most overlook, like the “ordinary” people all around us.  As St. Paul noted in the First Letter to the Thessalonians, “in receiving the word of God from hearing us, you received not a human word but, as it truly is, the word of God, which is now at work in you who believe.”  1 Thes 2, 13.  That was because God used Paul to communicate His word, as God had said He would do in Acts, declaring:  “. . . this man is a chosen instrument of mine to carry my name before Gentiles, kings, and Israelites . . .”  Acts 9, 15.  And God used another ordinary person, a disciple named Ananias, who happened to be living in Damascus, to give Paul sight and initiate Paul into his Christian mission—perhaps even to baptize Paul (though Acts doesn’t actually tell us who baptized Paul).  Acts 9, 10-19.

God has a way of surprising us like that, like when Jesus was born in “stray poverty” in a stable in Bethlehem instead of a grand palace in Rome or Jerusalem.  (Fr. Robert Barron quoted Bono, the lead singer of U2, for the line “stray poverty”.)  Besides, if we look anew at those ordinary things that surround us all the time, we might be surprised at just how wondrous they really are—like Carolyn Arends’ stars:  even without a message written in them, they’re pretty spectacular.  And St. Augustine said of the people walking around with us everyday:  “Men go abroad to wonder at the height of mountains, at the huge waves of the sea, at the long courses of the rivers, at the vast compass of the ocean, at the circular motion of the stars, and they pass by themselves without wondering.”  As C. S. Lewis wrote in The Weight of Glory:

It may be possible for each to think too much of his own potential glory . . . it is hardly possible for him to think too often or too deeply about that of his neighbor . . . to remember that the dullest and most uninteresting person you talk to may one day be a creature which, if you saw it now, you would be strongly tempted to worship, or else a horror and a corruption such as you now meet, if at all, only in a nightmare.  All day long we are, in some degree, helping each other to one or the other of these destinations.  It is in the light of these overwhelming possibilities, it is with the awe and the circumspection proper to them, that we should conduct all our dealings with one another, all friendships, all loves, all play, all politics.  There are no ordinary people.  You have never talked to a mere mortal.  Nations, cultures, arts, civilisations—these are mortal, and their life is to ours as the life of a gnat.  But it is immortals whom we joke with, work with, marry, snub, and exploit—immortal horrors or everlasting splendours.

Which brings up the biggest surprise of all:  we, too, are on a mission from God, whether we realize it or not. We were made by God Himself as His chosen instrument for some aspect of His work that needs doing.  As for figuring out what that mission is . . . well, the first step is to realize that we have one.  After that . . . keep an eye on your mailbox.