I don’t know about you, but when I was growing up, the “one”-ness of the Catholic Church was often explained as such: 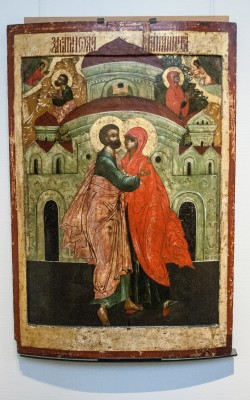 "The Meeting of Joachim and Anna"

Anybody who’s ever been to an Eastern rite liturgy knows how this definition of “one” becomes shattered at the first “Lord, have Mercy.” And if you’re lucky enough to attend Divine Liturgy today, on the Feast of the Maternity of Anna (her conception of Mary), everything you thought about what makes a Catholic Catholic and what we’re allowed and not allowed to believe might just go up in flames because you probably won’t hear anything about an “Immaculate Conception” or Mary being conceived without the guilt of original sin.

One of the most common questions Eastern Catholics get from Roman Catholics is “Why don’t you celebrate the Immaculate Conception?”, presumably because they see a different name for the feast day on our calendar or heard the rumors. The answer to this is important, because it illustrates how incredibly diverse our church can be while remaining in union with one another.

The short answer to that question is that Eastern Catholics most assuredly celebrate Mary being conceived, and we believe that Mary was conceived without the guilt of original sin. However, this is not the highlight of the feast for us because we believe it is the ordinary circumstance for every conception.

Confused? I was when I first learned this, too.

Let’s start by discussing original sin. Roman Catholicism, following St. Augustine’s theology and the Western translation of Romans 5:12, teaches that the first sin of Adam and Eve resulted in a globally inherited guilt for that first sin.

(It’s important to note that neither of those explanations are exhaustive regarding each church’s theology on the first sin and its effects; I’m sticking to simply what is necessary for understanding the question at hand).

Given the Roman perspective on the first sin, one can see that Mary being conceived without the guilt of original sin is something extraordinary and merits special celebration in that spirituality. However, for the Eastern Catholic, Mary being conceived without the guilt of that first sin is rather ordinary and does not differ from any other conception in that regard. In fact, she even inherits death from that first sin according to our tradition.

When I explained this to a friend, they responded, “But that makes Mary just like everyone else.”

A lot of people ask me how we as Eastern Catholics can believe this about the effects of the first sin and Mary’s conception and still be in union with the Catholic church. To be in union, one must accept all of the dogmatic teachings, which includes Mary's conception without sin. It’s important to note that this teaching simply points out that she did not inherit the guilt of that first sin and remained sinless throughout her life. Eastern Catholics believe this completely. We just don’t believe her being conceived without the guilt of that first sin is something out of the ordinary. There is no dogma stating that Catholics must believe everyone was conceived with the guilt of original sin.

“The sayings of the prophets are now being fulfilled: the holy mountain is planted in the womb; the divine ladder is set up; the throne of the great king is ready; the God-inspired city is being adorned. The unburnable bush is beginning to bud forth, and the treasure house of grace is overflowing. It is spreading over the rivers of unfruitfulness of the God-wise Anna, whom we glorify in faith.”

(Sticheron for Vespers for the Feast of the Maternity of Anna, available from the Metropolitan Cantor Institute).

Why should any Roman Catholic care about this? Well, first of all, it’s great trivia to have up your sleeve for impressing people at Knights of Columbus breakfasts and Jesuit cocktail parties.

Uh, kidding. Even though I know some of you are a little intrigued by that possibility.

The real reason I wanted to share this with you is to, number one, address a common concern about the Eastern churches, and number two, to illustrate how diverse the Catholic Church truly is.

We are not one because we believe exactly the same things about everything. The beliefs that unite us are actually much fewer than I think many of us have been led to understand in common, American catechesis.

My hope is that sharing this with you gives you not only have a better understanding of the Eastern churches’ beliefs regarding this feast day, but also a greater appreciation of the Church’s diversity and of the incredible mystery of the God whom She worships.