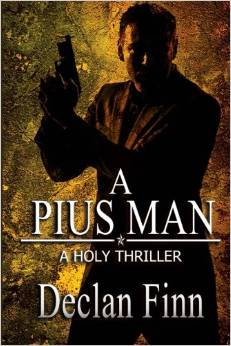 John Konecsni writes as Declan Finn and is the author of the Pius Trilogy "holy thriller" series. His Seafood Chowder is a must-have on holidays, and this soup is extremely easy to make. --Barb Szyszkiewicz

Throw in all canned items [INCLUDING THE WATER], spices, and white wine, bring to boil.  Throw in each frozen item individually, bringing each to a boil before throwing in the next one.  If you're using frozen salmon, be careful to break it up as you're cooking.

Shrimp goes in last; the rest can go in any particular order.

Bring to boil again, and keep going for some extra time.  Allow to simmer if you like (and need to wait for people so show up.)  Serve. Enjoy.

Learn more about Declan Finn's novels at The Pius Trilogy.