The Grace of Rebirth: Chapter 8 {Grace of Yes Book Club} 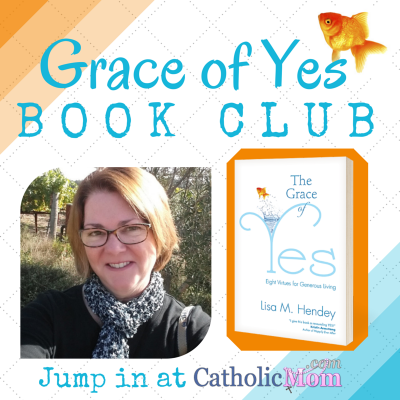 I had responded to and auditioned for the lead singer position in a professional praise and worship band. I had effectively won the talent part of the competition; all that was left was an interview with the band members. At that time, I was a fallen-away cradle Catholic in my early twenties. I grew up singing in a few different bands, and the evangelical churches that offered contemporary praise and worship music felt like a good fit at the time. It was a blend of two great loves of mine --- God and music. Now I was one conversation away from landing a professional gig.

Then came the question that brought our rollicking conversation to a screeching halt.

"Lisa, have you been born again?"

I tried to muster a story about how I had a rebirth of sorts during my ninth grade Confirmation Mass. And at the mention of Confirmation and Mass, the room became silent. I knew I had bombed. At one point the conversation turned very anti-Catholic and the band basically tried to justify my comments based on my incomplete, Catholic understanding of what it means to be "born again." {Click on over here to read about the Catholic response to that question.}

I walked away from that interview knowing it was over. The band didn't want me to be a part of their group. Equally, I didn't want to be a part of a group who carried such open hostility toward Catholics. Even though I wasn't a practicing Catholic at the time, my immediate family members were faithful. The attitude the band members shared was a direct insult at my family.

Looking back now, I see how that moment played a minor, yet important, part in a “rebirthing” experience. A few months later, I had a deep desire to be back in the Catholic Church, and I found myself driving around town one Sunday morning looking for a place to attend Mass. I ended up at a parish named after St. Cecilia, the patron saint of music, and felt at home. I eventually came back into full Communion with the Church, and there at St. Cecilia, I even found a group of musicians and formed a Catholic praise and worship band.

I was also a graduate student during that time, and once I graduated, I began making a career for myself in city management. I was still casually active in music ministry, as a cantor for Mass and many a wedding or funeral, but I buried most of my music ambitions once my career took off. Today, I rarely do much with music unless it’s at home or from the pew. In fact, most people in our current parish don’t even know I sing. I’m not purposefully putting my light under a bushel basket. It's simply a matter of choosing the greater good, and I am truly finding peace in doing my share from the pew.

Now I’ve walked away from the career to become an at-home, homeschooling mom to three, and for the past five years, I have supported my husband as he completed the deacon formation process. The Holy Spirit clearly told me to get comfortable in the passenger's seat because it was time for Joel to obey and follow his call.

If ever I was addicted to myself, the path that God has me on right now has been the best detoxifier. God continues to reveal Himself in new and sometimes surprising ways, and the Holy Spirit is constantly opening the door for personal rebirth. Reflecting on my faith journey and listening to the witnesses of others, I’m constantly reminded that God reveals Himself to us as we’re prepared to receive Him.

By the grace of God, here I am reflecting on chapter 8, "The Grace of Rebirth." My husband is ordained now; it's safe to say I'm in the middle of another period of rebirth. God certainly didn't take away my dreams and charisms the day Joel was ordained.

But now what? What does it mean to be a deacon's wife? As I am working through that, the following words from Lisa Hendey have resonated with me:

"I'm personally ready to move beyond comfortable confines to explore the vast potential God is calling me to in my life. When I start to second-guess my worthiness to rise to that call, I remember the followers Jesus called -- fishermen, a repentant tax collector, a woman of ill repute. In them, Jesus saw God's grace. He called them, taught them, and challenged them to live up to their full potential, sending them out into the world to shine his light while caring for those in need. They were called to go beyond what they had always known, to leave the comfort of the synagogue with little or no safety net. The disciples' yes was a radical commitment to trust that God had the perfect plan for their lives."

Lisa goes on to share about one of her super crazy-fun life’s dreams, an opportunity that would require her to leave her safety net, but would also allow her to shine Christ's light with a very large audience. You really must read the book to find out more.

Thanks to Lisa's revelation about her big-time dreams, I've been thinking: what are a few of my dreams and life's goals? God has gifted me with the charism of music, and while I’ve had to set that aside, I’m sensing I’m being called to share those talents in new ways. What does that look like for me? I don’t know, but here’s an idea (or three). I have admired Catholic musician and songwriter Matt Maher for many years now, not only for his musical talents, but because he has found a way to flourish as a devout Catholic in the contemporary Christian music world, which can be less than friendly to Catholics in my experience.

I would love to sing back-up for Matt one day. Because that's what I do -- I blast his music in my home or car, and create harmonies with him. Now I’m not just aiming for a one-time-hop-up-on-stage-and-look-like-a-goof while singing with him type of opportunity. I’m talking about heading into the studio to collaborate and make music with him. (Mr. Maher, if by chance you’re reading this, I have references. People you know, know me!)

Heck, while I’m pouring my heart out, here’s another pipe dream. Seems like every year right around this time, I start daydreaming about putting on a Christmas concert where I sing the classics. I can see myself standing center stage in a historic theater wearing a beautiful red dress while I sing into a vintage microphone with a big band accompanying behind me. Clearly I haven’t thought much about that one!

Now, for a not-so-outlandish dream, rather a goal, I’m going to work toward incorporating my music into the talks and retreats that my husband and I lead. We’re actually headed to a parish near Vegas in the coming weeks to lead a two-day marriage retreat, and I’ll be sharing some of my music then.

It’s uncomfortable for me to share those deeply personal dreams here. God and my husband were about the only two who previously had a clue. But after reading The Grace of Yes, it only felt right to share those intimate thoughts with you. So now that we’ve read about Lisa Hendey’s awesome life dreams and goals in Chapter 8, and I’ve shared mine here, all that's left to know now is what are yours?

This is our final week for the book club. Thank you for participating! If you want more information about the book or the book club, be sure to visit the Grace of Yes Book Club page.