Reflection for the Baptism of the Lord 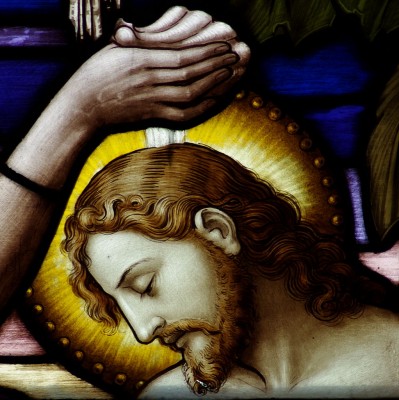 At first glance, the scene makes little sense.  John’s strident call to repentance provokes an overwhelming response.  People of all shapes and sizes flock to him in the wilderness.  They are baptized in the Jordan as a sign of repentance and cleansing.

Suddenly, out of the crowd steps John’s cousin, Jesus.  Wait a minute.  What’s Jesus, the sinless one, doing in a crowd of repenting sinners?  What’s he doing coming forward to be baptized by John, who is by his own admission, is inferior to his cousin?

Jesus does not enter the water to be sanctified.  No, the Holy One enters the water to sanctify.  He empowers the water to become no longer just an outward sign, but a vehicle of the Holy Spirit bringing inner cleansing, rebirth, and transformation.  Here Jesus institutes the sacrament of Christian baptism, something essentially different and greater than the baptism of John, which foreshadowed it.

Immediately after coming out of the water, the Spirit descends upon him in the form of a dove.  Now another sacrament is instituted by Christ, the sacrament of confirmation or, as the Eastern churches call it, chrismation.

Notice that as the Spirit descends upon Jesus, the Father announces from heaven that this is His beloved Son.  Here we have a majestic revelation of the Most Holy Trinity, one God in three persons.  Then notice that Peter, speaking of this event in Acts 10:37, calls it Jesus’ “anointing.”

In the Old Testament, people were anointed with a special type of perfumed olive oil called “chrism” which was stored in a bull’s horn, a symbol of strength.  The first people to be so anointed in the Old Testament were priests, authorized to offer sacrifice on behalf of the people.  Then came prophets, anointed to proclaim God’s challenging and energizing word.  Finally kings were anointed by God to save their people from their enemies.  Actually, the reigning king of Judah was called the anointed one, “messiah” in Hebrew or, in Greek, “Christ.”

So this feast is Jesus’ “name day.”  Of course he is the Word made flesh, full of the Spirit, and savior of Israel from the moment of his conception.  But on this day, the Spirit anoints his human nature in a new way, empowering and equipping him for battle, for his mission to smash the oppressive powers of sin, Satan, and death, and to lead his people into freedom.  He is anointed or “christened” not just as savior-king, but as perfect prophet who speaks God’s final word, and perfect priest who offers the perfect sacrifice taking away all sin.

Some wonder why we need the sacrament of confirmation.  To some it appears to be an afterthought, as anticlimactic.  After all, we receive the Spirit in baptism and receive Christ bodily in the Eucharist.  So what else do we get when we are confirmed?

Simple.  We receive our mission and the power to carry it out.  For being a “Christian” is not about just “getting saved.”  It’s about sharing in Christ’s anointing to transform the world.  The mission is an essential part of the package, not an option.  That’s why we are called “Christians” or anointed ones.  It is not just priests and religious who are supposed to make it happen.  Every single one of us is called and anointed.  And that’s why confirmation is one of the essential sacraments of initiation.  Without it, one is not fully incorporated into the Church, which is a missionary community.

The question for those of us who have received this power-packed sacrament is this–what are we doing with it?