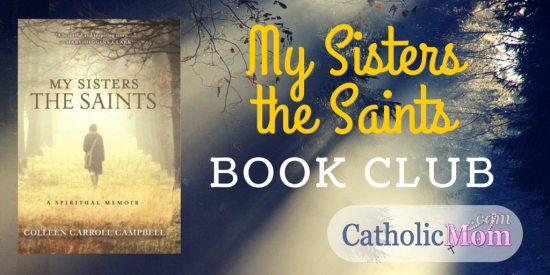 In chapter one of My Sisters the Saints, Colleen writes about her spiritual awakening in college. After growing up in a devoutly Catholic home, she went through a period in her early adult life when she was only nominally Catholic — following the letter of the law without the spirit of the law making an impact on her life and her decisions. She discusses how her party girl life left her feeling empty and unfulfilled, but that those feelings were what led her to take her first steps to "open the door to God." After a heartfelt prayer asking God to help her reclaim the joyful faith of her childhood, she was slowly, but surely, drawn closer to God.

Colleen's faith sounds a lot like my own when I was in college, and I could easily relate to her experiences of living in the world with only a toe in the Church's life. When I went away to college after obtaining my Associate's at the local community college, I went from going to Mass every Sunday to going only if I was home with my parents for the weekend. And even then, I frequently missed Mass because I was working part-time as a waitress when I came home, frequently working four shifts in three days to make money for books (and fun). Plus, I really needed to be sure I saw my boyfriend enough, and of course there had to be time carved out to go out clubbing with our friends.

Let's just say that finding a time I could make it to Mass — even the Last Chance Mass on Sunday evenings — was not a priority in my life at that point. Sure, I said I loved God. Sure, I still received Communion whenever I managed to get to Mass. But I hadn't been to Confession in years, and I wasn't living the life I should have been living. While I wasn't as bad as some of my peers, I certainly wasn't the good Catholic girl I wanted to believe I was.

God had started to work on me, though, and my boyfriend and I met some Evangelical Christians who were On Fire for the Lord who became very dear friends. They showed me a kind of Christianity I hadn't ever experienced before. I started listening to tapes of Christian talks and reading books by various Christian authors that led me to a deeper love for God. I toyed with finding a "Bible Church," as one friend called it.

When I told my father, he said flatly, "The Catholic Church is a 'Bible Church.' Where do you think the Bible came from?" When I thought about his comment, I realized that Mass certainly was full of Bible readings! Relieved that I could apparently hear plenty of Scripture at my parish, I stayed put within the Church, but this was still mainly more out of familiarity and a tribal loyalty than because I believed the Catholic Church to be the fullness of the Christian faith. And yet my love for Jesus slowly grew again, and I recovered some of the joy I had when I was a little girl.

My boyfriend eventually became my fiancé, and I prayed for his conversion from his agnostic atheism back to Christianity so that our wedding ceremony would mean more to him. (He had already promised that when we had children, no matter what his beliefs might be he would faithfully attend Mass with our family. It was important to him that our children make a decision on Christianity after being exposed to it first!) When he called to tell me that he was going to return to his Christian beliefs, I was over the moon!

It was good for us to be on the same spiritual path, even if he wasn't Catholic. After we got married, we attended a parish not far from our home, though only sporadically. I learned that there was a Deaf Ministry there, and I started to interpret Mass for our parishioners who were Deaf and Hard of Hearing. I still didn't go to Mass when I wasn't interpreting, though, and sleeping in on an occasional Sunday was a luxury we took advantage of without thinking about our Sunday obligation.

When our first daughter was born, my husband and I made the commitment that we would not miss Mass again without grave reason. Beginning October 15, 1998, we went from hardly ever going to Mass to never missing Sunday Mass, and even making it to church on Holy Days of Obligation. This was the first step in opening the door wide to God so He could step into my life.

Interpreting the Mass had been making an impact on me that I didn't expect, too. My very best work was done at the Mass, and I was present right there next to the altar when our Lord was made present during Consecration. I stood nearby as our bishop Confirmed the son of Deaf parishioners. I interpreted the consecration Mass of our new building, and as a cardinal read a letter from Pope John Paul II, I realized that my hands were transmitting the words of a future saint. I realized that God could work through me!

From those occasional Masses before our kids were born when I interpreted, God reached out to my soul and began to draw me closer over the years. I learned more about my faith by interpreting parish Lenten retreats and the questions our Deaf parishioners had afterwards and by teaching in the religious education program and preparing for Masses and interpreting First Communions and weddings and more. It all led to making the decision to use a Catholic curriculum when we began to homeschool our children.

All along, God just kept gradually pulling me in. Oh, I'd resist plenty, like a fish trying not to be caught, but He would let the line out and then just start reeling me in again. I started reading about the Faith and studying it more. Eventually, I became a Lay Dominican; I even made my First (Temporary) Promises last year. God continues to draw me closer, bringing me near the boat to live in complete harmony with him.

I'm not all the way in the boat yet, but when I look back, I can clearly see God drawing me in, little by little. I can see a slow progression to where I am today. I'm not completely sure what my next step is going to be, but I think being a part of the Dominicans is a part of that. I'm coming nearer to the end of my life of teaching my children and learning about the Faith with them, and now I'll have my Dominican Province to help lead me along. I truly believe that God is using them as an instrument to sanctify me and bring me near, just as He has used my interpreting, my years as a catechist, and my years of homeschooling to do just that.

Feel free to comment on your own thoughts from the reading. When you look back on your journey, what was the first step of the journey that opened the door and let God to step in? Can you see the baby steps you've taken toward a deeper relationship with the Lord? In this week's reading, your impressions and reflections, and/or your answers to these questions.

Next week, we'll cover Chapter 2 - "A Child Again." For the complete reading schedule and information about our Book Club, visit the My Sisters the Saints Book Club page.