What Abraham Lincoln Can Teach Me about Lent 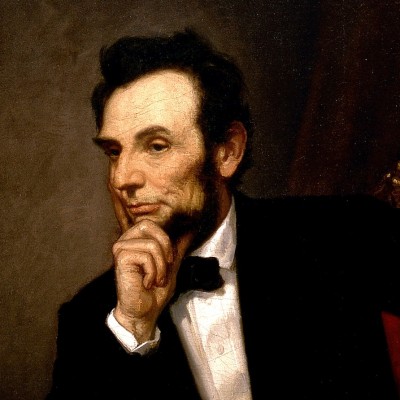 "When is his feast day?" asked her twin sister.

So I had to explain that because he was not Catholic, the Church could not officially canonize him. While he does not have a feast day, our country does celebrate his birthday, February 12. Furthermore, we have All Saints Day when we celebrate all the saints who have made it to heaven with God. That would include our holy protestant brothers and sisters. So, technically, November 1 would be his feast day.

President Abraham Lincoln is my favorite president. He had so many good and heroic qualities: his sense of humor, his perseverance through many trials, his determination to do what was right. What faith he must have had in God! Then I myself began to contemplate the legacy of holiness that Abraham Lincoln left us, for until the twins' questions, I had never really thought of it that way.

Though young Abraham went to school only "by littles," by which he meant that he had very little formal education, Abraham Lincoln loved learning.  Historians tells us that the total amount of time Abraham spent in school would have been less than a year. He, nonetheless, learned enough to compute and to read. The rest he taught himself by reading whatever book he could beg or borrow. Since the  Bible was the only book his family owned, he read it over and over, memorizing most of it. The lessons contained therein became part of him. His reading of Scripture shaped his thinking and his morals.

Perhaps through his reading of Scripture, President Lincoln gained the wisdom to understand what a blessing from God unity is. After all, Jesus prayed during His agony that we may be one just as He and His Father are one. The Blessed Trinity is Three in One, united in Love. Our marriages, families, communities, especially church communities, and our country should all reflect this unity. The 16th President deemed unity a virtue worth fighting for.  Quoting the synoptic Gospels, Lincoln declared, "A house divided against itself cannot stand." He knew preserving the Union would cause mortifications and great sacrifices; however, he understood that some things greater than ourselves are worth fighting and even dying for.

Because these sacrifices had to be made by others, not just himself, Lincoln displayed great compassion. He hated slavery from the moment he saw people being bought and sold like property on a trip down south to Louisiana. He got into politics because he wanted the evil practice of slavery to end. His Emancipation Proclamation was the beginning of the end of this abomination in our nation.

He loved and had compassion for the soldiers, on both sides of the battle. He would visit them in the hospitals, shake hands and talk to every single one. He wrote letters to the families who lost their sons in the war. He understood the anxiety of having a son in the army (his son Bob was a soldier). Moreover, he knew the pain of losing a son (Will died while living in the White House).

He carried the weight of a nation at war. The man so well-known and loved for his sense of humor remarked during those years of war, "I do not think I will ever be glad again."  His cross was heavy. His faith was great.

So what can President Lincoln teach me as I prepare for Lent?

1. Never stop learning, especially about God. Let my Scripture reading form me and mold me more into His image and likeness. Having a MA or PhD in theology would be nice, but it is not necessary. I just need to pull out some good spiritual reading books and make time to read them. A good Lenten practice would be to spend at least 15 minutes more a day in spiritual reading.

2. Unity is worth the sacrifice. There are many sacrifices I can make throughout the day for the sake of unity in my marriage, family and community. The greatest of these mortifications would be to hold my tongue when something is about to come out that would cause division. Instead, I ought to strive to use only words that will build up.

3. Compassion moves us to give of ourselves. Whether it is in acts of monetary almsgiving or a giving of our time, Lent is a time to reach to others out in compassion.  President Lincoln reminded me that a true giving of self does not feel comfortable. This Lent, I must try to give even more.

So while my dear president, Mr. Abraham Lincoln, was not Catholic and probably never celebrate Lent, per se, he from heaven will have an effect on my Lent this year, thanks to my twins.

God has given Kelly lots of wonderful opportunities to follow Him. She was a Dominican Sister of St. Cecilia in Nashville, an education coordinator for a Catholic Charities' program for pregnant teens, a middle school teacher, a director of religious education and is now a youth minister. Her most challenging and rewarding calling, though, is wife and mother of ten children. What she has learned, she blogs at CatholicMom.com.