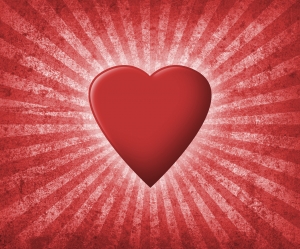 Saint Valentine's Day is a wonderful opportunity for us to show how much we care about those we love.

I remember when my mother was a "home room mother," and she presented a word game for our class: How many other words can you make out of the letters in VALENTINE? The prize was a big chocolate heart wrapped in red cellophane paper--to me, it was beautiful and I wanted it--bad! I wanted to give it to my Daddy.

So I crunched down in my desk with pencil in hand. I made fifteen words from those letters, just one more than Ed, another seven year old. But when my mother saw that I had the most words, she whispered in my ear. "Sugar, Will you let Ed win?"

Ed was a quiet, skinny child being raised by his very old grandmother, whom he loved very much. She was the only family he had. No one knew where Ed's parents were. He and his grandmother lived--as they said back then, on the 'other side of the tracks.' And they didn't have much. He wore the same pair of pants everyday and only an occasional change of his shirt. Still, he was by far the smartest child in the class, almost always 100's on his papers.

But give up the heart for Ed? Oh, what a decision! And my mother knew I didn't want to make it. Still, she whispered, "He wants it for his grandmother, sugar." Okay. Well, I wanted it for my daddy. "And I do have another heart just like it at home, and it will be yours." The deal-clincher.

So I watched Ed light up like a Fourth of July sparkler when it was announced that he won the prize. On the way home from school, my mother smiled at me and said I'd done just what Saint Valentine would have wanted me to do. Of course, I was out nothing, really--another heart waited for me at home. That night, after I gave the beautiful red cellophane wrapped gift to my Daddy, I pictured Ed and his old grandmother eating the other chocolate heart, the heart I'd won. And I thought a little bit about what loving someone really means.

We really don't know how many St. Valentines there were. One opinion is that he was a Roman martyred for refusing to give up his Christian faith. Other historians hold that St. Valentine was a temple priest jailed for defiance during the reign of Claudius. Whoever he was, Valentine really existed because archaeologists have unearthed a Roman catacomb and an ancient church dedicated to Saint Valentine. In 496 AD Pope Gelasius marked February 14th as a celebration in honor of his martyrdom. (Catholic Online)

Although the mid-February holiday celebrating love and lovers remains wildly popular, the confusion over its origins led the Catholic Church, in 1969, to drop St. Valentine's Day from the Roman calendar of official, worldwide Catholic feasts. (Those highly sought-after days are reserved for saints with more clear historical record. After all, the saints are real individuals for us to imitate.) Some parishes, however, observe the feast of St. Valentine. (americancatholic.org)

Happy Valentine to all those I love--especially, Pat, my son-in-law , whose birthday is today. And to 'Ed,' who grew up to be a fine Jazz musician.
Copyright 2015 Kaye Hinckley