Why is Lent Forty Days?: Reflection for Ash Wednesday 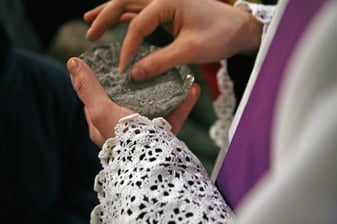 In the English language, the special season before Easter is called “Lent.”  The word comes from the “lengthening” of daylight hours as we progress from the darkness of winter to the new light of spring.  But other languages, such as Spanish, have a name for this season that is derived from the word for forty.  It is the season of the forty days.

Think back to the Old Testament.  Noah and company were in the Ark for 40 days.  Moses was up on Sinai receiving the 10 commandments for 40 days.   The Israelites wandered around the desert for 40 years.

So why all these forties?  Probably because it is forty weeks that a woman carries her developing baby in the womb before a new birth can take place.

All these “forties” are a necessary and not-so-comfortable prelude for something new.  In Noah’s case, it’s the rebirth of a sinful world that had been cleansed by raging flood waters.  In Moses’ case, it was the birth of the people of the covenant.  For the nomadic Israelites, it was the start of a new, settled existence in the Promised Land.

And Jesus?  What did his forty days mean?  The birth of a new Israel liberated from sin, reconciled to God, and governed by the law of the Spirit rather than a law chiseled in stone.

But think back to the story of Moses and the Israelites.  There was someone who did not want them to go out into the desert to offer sacrifice to their God.  Pharaoh did not take the loss of his cheap labor lying down.  When Jesus begins his mission of liberation, there is another slave master who is no more willing than Pharaoh to let his minions go without a fight.

Since the sixties, it has been fashionable in some quarters to dismiss the devil as a relic of ancient mythology or an invention of medieval fantasy.  The guy with the pointy tail and the pitchfork comes in handy in cartoons and costume parties, but how can we take such an image seriously?  In the Bible, they say, let’s read “Satan” merely as a symbol of human evil.

Such a view is clearly at odds with Scripture, Tradition, and the constant teaching of the Magisterium.  Our battle is not against flesh and blood, says St. Paul.  If you don’t know your enemy and his tactics, you are bound to lose.

The temptation of Jesus in the desert shows us the tactics of the “Dark Lord.”  Bread, a symbol for all that sustains our physical life, is a great blessing.  But Satan tries to make material things the ultimate, distracting us from a deeper hunger and a more satisfying food.  Political power and all leadership is intended by God for the sake of serving the common good; Satan twists things to make leaders self-seeking, oppressive tyrants like himself.  The lust for power and fame ironically leads not to dominion but to slavery to the Dark Lord (remember what happened to the Nazgûl in the Lord of the Rings!).  Then there’s religious temptation, the trickiest of them all-- Manipulating God for our own glory, using his gifts to make people look at us rather than at Him.  Sounds a lot like the Pharisees.

Jesus triumphs in this first wrestling match.  He shows us how to keep from being pinned.  Fasting breaks undue attachments to material blessings and stimulates our spiritual appetite.   Humble service breaks the stranglehold of pride.  The reverent worship of authentic faith breaks the full nelson of superstition, magic, and all arrogant religion.  And the word of God is shown as the sword of the Spirit, the secret weapon that slashes through the lies of the enemy.

So our forty days?  Time to use the tactics modeled by our captain and break the strongholds. Prayer, fasting, humble service fueled by the heavenly bread of the Eucharist and Scripture.  If we make use of them diligently during this season, pregnant with possibilities, we can enter into greater freedom.  Darkness can give way to increasing light.  Something new and wonderful can be born in us.

Marcellino D’Ambrosio, aka, writes from Texas. This excerpt from his new book 40 Days, 40 Days: A New Look at Lent appears here by permission of author and publisher.  The book is,  with his other resources, available at dritaly.com.