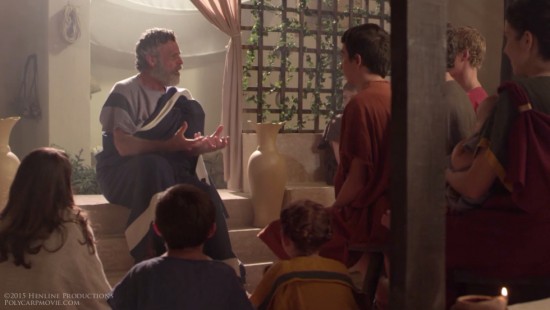 Henline Productions has released the new feature-length drama, POLYCARP, which depicts the true story of second century Christians persecuted at the hand of Roman oppressors. Polycarp, a prominent early church father, courageously stood against Caesar-worship and challenged many believers to stay true to their faith no matter the cost. The movie features Garry Nation (INDESCRIBABLE) and Rusty Martin (COURAGEOUS), and has been released exclusively for church showings beginning February 23rd.

Several Christian leaders have come out in support of POLYCARP ahead of it's release, including Ray Comfort, evangelist and best-selling author. “POLYCARP is a God-honoring, Christ-centered, and moving story that will make you want to run with the divine message, while we still have the God- given liberty.”

Ken Ham, president of Answers in Genesis and the Creation Museum says, “I appreciate how this movie, based on the true historical account of the life of Polycarp, challenges all Christians concerning what we might do in the face of persecution. Because Christianity is increasingly under attack in our secularized Western world, POLYCARP is a ‘must watch’ for every Christian.”

Christians have been repeatedly disappointed by Hollywood attempts to woo Christians with movies like the blasphemous NOAH and EXODUS: GODS AND KINGS. The makers of POLYCARP are convinced that Christians outraged by Hollywood Bible movies will find POLYCARP to be a refreshing alternative. Director Joe Henline and writer Jerica Henline, a brother-sister team, are excited to introduce viewers to a great hero from Christian history.

POLYCARP has released nationwide and is available exclusively to churches for public showings on a donation-only basis. More information about the release of POLYCARP and how to bring the film to your parish community visit www.polycarpmovie.com.