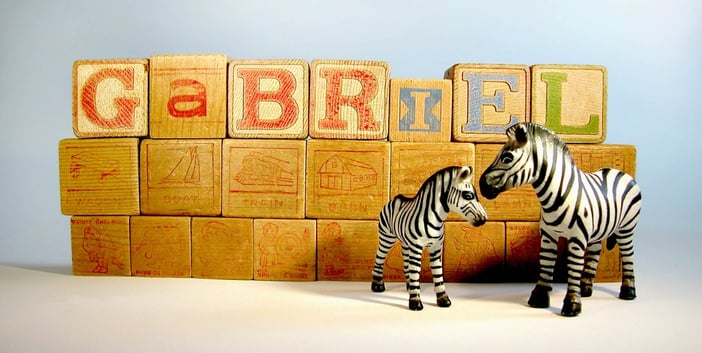 If you have children or know people who do, you may have participated in or witnessed this scenario: Mom suggests certain names for consideration; Dad hates them all. Mom asks Dad what names he likes -- he either doesn't have any suggestions, or his suggestions are the total opposite of Mom's taste. My husband, who has always joked (?) that "Bob" is his "naming style," has teased me that if the naming of our children were left up to me, they'd be named Nicodemus and Hezekiah. He uses that example to point out how lucky our kids are that they have a dad who tempers their mom's crazy taste. Hardy har. (I do love Nicodemus. And I don't have as much problem with Hezekiah as he wishes I did.)

If the naming of the children were left up to my husband, I have a sneaking suspicion they'd have names like Boy #1 and so on (George Foreman style), or whoever his favorite football player happened to be at the time, or he'd end up asking for my help because he didn't have any ideas. (I could see this happening especially in the beginning of our parenthood -- now that we've named a few kids together, he's definitely gotten some good ideas.)

Despite our differing tastes, we have successfully named six born sons and one miscarried baby, and I have found over and over that the absolute height of baby naming satisfaction for me is when my husband and I hit on that name that we both agree on. It might not be my very favorite name or his, but I find that I'm much happier and more peaceful with our choice knowing that we agreed on it together. I think I would actually hate it if I got my way -- if my husband gave in. I want him to love his children's names too.

But how do you find that name that you both agree on? What if Mom prefers Joseph/John/Patrick-type names -- names traditional to our faith that don't raise too many eyebrows -- but Dad loves heavy-hitting uncommon Church Father type-names like Polycarp, Irenaeus, or Eusebius? Here are three ways I could see working with this:

To me, a good nickname can solve the vast majority of he likes/she likes disagreements. If the proposed name is too exotic for the other parent's taste, could a friendly, "normal" nickname be tricked out of it for everyday use? Or the proposed name is too vanilla for the other parent, could a more unusual nickname be fashioned? To tone down the more exotic, Augustine could spend his days as Auggie or Gus; Ignatius as Nate; Cajetan Joseph could go by CJ. To jazz up a more common name, you could try Finn as a nickname for Francis, or Bede for Benedict (a two-for-one saint bonus here! St. Benedict and St. Bede in one little guy), or even something like Rory for Robert or Toby for Thomas Bernard.

Use a saint's full name as a first and a middle

There are a few different ways to do this, of course, and I'm sure you know them already. For example, Mom gets to choose Baby Number One's first name and Dad gets to choose the middle; next baby vice versa. Or decide together to have Dad go nuts with the middle name while Mom chooses a more conservative first name. Or find names with overlap -- to bridge preferences for Patrick (Mom) and Polycarp (Dad) for example, such overlapping names might include: Augustine, Dominic, Benedict, Simon, Nathaniel, Roman, Adrian, Jude, Matthias, Sebastian, Gabriel, Thaddeus, Jerome. Names that hit you in the face with their Catholicism, but don't require you to have read The Complete Ante-Nicene & Nicene and Post-Nicene Church Fathers Collection (3 volumes) to know who they are.

How have you handled the inevitable disagreements in baby naming? Do you have a system worked out (e.g., Mom names this baby, Dad the next; Dad chooses first names, Mom chooses middles)?

Man to Man, Dad to Dad
Read
Dad's Life
Read
"Dad's not Catholic. So why should I be?"
Read