The Uncharted franchise was one of the flagships of Playstation ever since the PS3 was first released. With the upcoming Uncharted 4 on the horizon (for PS4), it might be a good time to take a look at these.

Uncharted 2, however, will be an incomplete review. For some reason, the disc stopped working in the middle of playthrough, and will not start again. 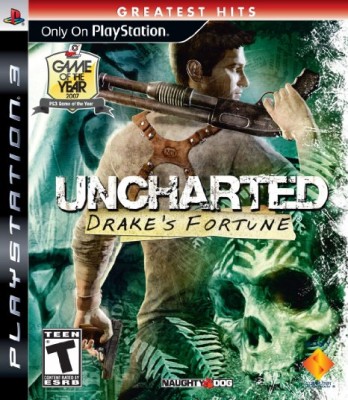 Nathan Drake is an archaeologist of the Indiana Jones / Lara Croft school of grave robbing -- find a historical treasure, and use it to find another historical treasure. There will be lots of bad guys in the way trying to kill him. It starts with trying to find Nathan's ancestor, Sir Francis Drake, who (according to this game) faked his own death in order to go after the lost city of gold. Along the way, he will find Nazi strongholds, and fight hundred-year-old nightmares.

In Uncharted 2: Among Theives, Drake must break into a museum and find clues to the mystery of the lost treasure of Marco Polo. During the sudden yet inevitable betrayal, Drake must climb through sewers and jungles in order to find his treasure.

This game feels very much like a Beta for the most recent Tomb Raider game.  The aiming and jumping button configurations are all similar (if not the exact same), but the mechanics are not as polished.  Nathan Drake isn't an athletic teenager, so his inelegant jumps might still be a design choice, and not a result of an unpolished game mechanic.  The primary difference is the "run and gun" mechanic which allows Drake to shoot over his shoulder as he's running away from a horde of Gollum-like cannibal hordes.

Uncharted 2 feels more like the completed game.  The running and jumping feels much more natural. The running and gunning feels like they wanted to distinguish themselves more from the Lara Croft franchise.

The weapons in both games felt very generic. Without taking notes, all I can tellyou is that they were World War II era guns, and unfunctioned like every other gun in every other game I've played since Halo.

There are some fun jumping puzzles around here. They're fun, honest. But it still feels like a dumbed down version of Tomb Raider or Prince of Persia.  It's fun.

The music works. It's drives the story well enough.

The graphics are quite awesome.  They've put in production values in both films, so they did their jobs here. In short, it’s beautiful.

In Drake's Fortune, there is cursing. It's mostly PG-13 rated swearing (yes, it's a thing, the MPAA grades it by number of words used in films).

In Among Thieves, there is more of it in the dialogue, as well as sexual situations. If the language in the Die Hard series is off-putting, this one will put you off.

There is some multiplayer in #2, but it's not the main focus.

Little to none. It's a fun little game, but I've played better.

At the end of the day, it's an okay game. It's carried by the graphics, some new features, and the characters. Drake is downright charming, as though he were played by Nathan Fillion.  But, really, there are better games out there.

Uncharted: Among Thieves, T For Teen.

My Rating: 7/10, good games.  Though they're not my most enthusiastic recommendations.

When you purchase this game through any of the affiliate links in this post, you support the work we do at CatholicMom.com at no extra cost to you!