WHERE HOPE GROWS: A Movie with Heart 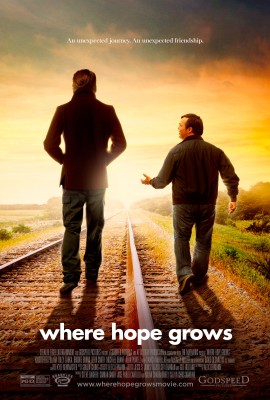 New out in theaters this weekend is the charming film WHERE HOPE GROWS:

WHERE HOPE GROWS is an inspiring story about Calvin Campbell (Kristoffer Polaha), a professional baseball player who was sent to an early retirement due to panic attacks at the
plate. Even though he had all the talent for the big leagues, he struggles with the curveballs life has thrown him. Today, Calvin sleepwalks through his days and copes with the challenge of raising his teenage daughter (McKaley Miller). As his life heads in a downward spiral, it is suddenly awakened and invigorated by the most unlikely person – Produce (David DeSanctis), a young-man with Down syndrome who works at the local grocery store.

As Calvin slowly loses the chip on his shoulder, he begins to see the world through Produce’s eyes. Calvin’s life begins to regain purpose and meaning as their friendship develops. The unlikely pair become intertwined in a way that gives Calvin a renewed perspective on the future. But their friendship is put to the ultimate test when an unexpected tragedy occurs due to a single decision echoed from Calvin’s past. WHERE HOPE GROWS is a film about finding redemption through faith, hope and love.

A DVD Review of "When Calls the Heart: It Begins With Heart"
Read
WHERE HOPE GROWS Movie Sees World Through Special Needs Eyes
Read
The First Week of Advent: The Hope Candle
Read