We are Our Chromosomes 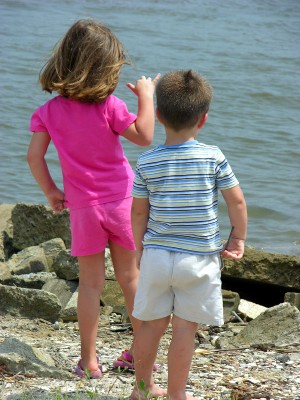 Society pushed for equality between the sexes. Experts told us we could do it. Politicians pushed for it at every corner. In the business world, strides were made. But with children’s clothing things have not gone so smoothly. It seems that some things cannot be legislated away.

In the early 1960s, we wanted our girls with ruffled slips, patent-leather buckle shoes and lots of pink. And boys were rough and tumble. Unisex did not exist pre-1960s because it made no sense until women grew out of their pink dresses and challenged conventional thinking. “Dads, if you would roughhouse and toss your daughters around like you do your sons, they’d be a hardier, stronger group,” the psycho-gurus claimed. “And mothers, while you are burning your bras in the sexual revolution, toss in those patent-leather shoes and pink dresses.”

Overalls and unisex colors covered the diaper set as they emerged from the Age of Aquarius. In the middle 1970s, while college students, my peers and I agreed: Raise your daughters more like your sons and the sexes will be more alike--more equal. It was the dawning of a new age. Girls would no longer be treated like the weaker sex and men would no longer be Neanderthal-types.

Where has the Unisex Clothing Gone?

Now, let’s fast-forward to the twenty-first century. Step into a department store and check out the unisex clothing. There isn’t any. There is a boys’ department and a girls’ department and there is no mistaking which one you are in. And, I venture to say, there has never been more lace, ribbons, patent leather or pink in little girl’s clothing since the dawn of civilization.

So, what happened to our social experiment? As the mother of ten children--eight boys and two girls--I can tell you what happened. The experts of the era were wrong, but Madison Avenue was right via the popular margarine commercial, which once stated, “You can’t fool Mother Nature.”

From the time my little tykes could crawl, the boys were conquerors and the girls nurturers. My boys had a nurturing side, and still do but the caveman warrior was there from the start. When a new baby appeared on the scene, my boys were just as quick to want to push the stroller as the girls. But in the hands of boys a stroller becomes a racehorse or crash car. In the hands of a girl it is a cradle on wheels. Girls mother their baby dolls and stuffed animals. They bathe, dress and feed them, and always want to cut their hair. These sorts of activities never occur to boys. Dressing a toy would involve work just like dressing themselves; it is something to merely get over with.

We Are Wired Differently

Several years ago I was helping out with a kids’ activity group. The moms took turns coaching and refereeing outdoor games. One afternoon an exhausted mom plopped down into a group of other visiting moms. “Boys are so much easier,” the mom lamented. “The girls have to argue every little detail and debate who is doing what, while the boys just want to play.”

I laughed. “But these simple, nonverbal boys who are easier to coach than girls, grow up and drive their wives crazy because of their unwillingness or inability to communicate.”

So by observing the natural inclinations of our children we can see that, in general, boys will be boys and girls will be girls. If you give a girl a truck, she will give her teddy bear rides in it. If you give a boy a doll, it will never get its clothes changed and it might one day attack all the stuffed animals on the bed--just for fun. You can teach your son to nurture, but if you put him in with a group of boys, things are going to get loud and wild. You can raise your daughter in green and orange overalls, but just walk into a department store and you will lose her in one of the pink aisles.

Absolutely there was a time that girls and boys were hindered in many ways by stereotypes. And I totally get that with the breakup of traditional families, gender confusion is a growing issue. But for now, let’s just keep things simple and say that unisex failed. Girls and boys usually want to be girls and boys. And they grow up to be men and women. Given the roots of whom they were born as, there’s a limit to how much we can blur the male and female roles. We are our chromosomes.

Perhaps one tiny part of our problems with relationships comes from our culture’s idealization of a marriage partnership where roles are interchangeable. The X- and Y-chromosomes have ramifications. Men and women bring different traits to a relationship and to parenting. Mothers are not fathers and fathers are not mothers. It’s just the way it is.