Book Notes: The Wife of Pilate and Other Stories 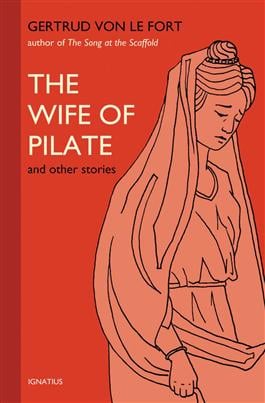 I normally don't take the time to read or even review fiction. It's not that I look down on fiction. It's just that I enjoy reading non-fiction so much more. One recent Catholic fiction title caught my interest, so I decided to give it a shot. It is called The Wife of Pilate and Other Stories, and it was written by Gertrud von le Fort. Other works by her, which are also available from Ignatius Press, include The Eternal Woman and The Song at the Scaffold. The Wife of Pilate and Other Stories is made up of three novellas - "Plus Ultra," "At the Gate of Heaven," and the title feature "The Wife of Pilate."

The three novellas are historical fiction in nature. "Plus Ultra" takes place in 16th century Europe and revolves around a woman who has the attention of the Holy Roman Emperor Charlies V. "At the Gate of Heaven" takes place during the Roman Inquisition trial of Galileo. "The Wife of Pilate," which was by far my favorite, discusses Pilate's wife, Claudia, during and after the Crucifixion of Jesus. The story is told from the point of view of a servant girl. In it this slave girl tells us about history we already know, like Jesus being crucified and Claudia trying to warn Pilate not to crucify this innocent man. The rest of the story goes into the changing marriage between Pilate and Claudia. After the Crucifixion, Claudia and Pilate are both haunted by the death of Jesus. Claudia's changes are more obvious and external. Pilate, like a typical man, internalizes his feelings and thoughts and grows colder. The fact that their marriage is in shambles is sad enough, but they also have a stillborn baby, and never any other children. The ending is mixed, so keep reading if you want it spoiled. Claudia turns from paganism to Christianity, but dies in the end. Pilate blames himself and almost kills himself because of it, but the words of the slave girl that Claudia, like Jesus, died because of Pilate and for Pilate stays Pilate's sword. This leaves the reader with a glimmer of hope that maybe Pilate could have converted in the end.

If I was judging this book on "The Wife of Pilate" alone, it would garner 5 stars. However, when taken as a whole, I have to give it 4 stars. "The Wife of Pilate" was compelling and gripping, but "Plus Ultra" and "At the Gate of Heaven" didn't hold my attention near as much. Also, the book cover quality left a bit to be desired. I'm very careful with my books, but this one warped from light reading, so that was a bit disappointing. Overall, I would recommend this book, especially if you like older historical fiction.