The real reason I'm still Catholic (A tribute to Dad)

As usual, I'm late to the party. It's been a few weeks now since Elizabeth Scalia over at Patheos posed a challenge to the Catholic blog world, basically asking the question: Why will you remain with the church "even as the world increasingly bares its teeth against it?"

It's a fitting image, the world baring its teeth at us, hoping we'll just go away once and for all, or at least stay silent. The Church poses a threat to modern culture like never before. And given all the controversy and examples of broken humanity within it, what sane person would stay?

I have watched my own friends and family members dropping away left and right. Meantime, here I am, sticking tenaciously by the Church, even as the arrows fly at her daily.

As a Catholic communicator, I've answered the question Elizabeth poses many times and in so many ways already, which is one of the reasons I've been slow to respond. Does anyone really care to read another blog post by Roxane Beauclair Salonen defending the Church?

It might seem a bit tired to keep this defense going, but if someone dear to me were under attack, I wouldn't relent. I wouldn't back down. If it were my own child, I'd be the mother tiger of all mother tigers, to the bitter end.

As I began reflecting on Father's Day coming up, and on the fact that I have been dragging my feet about this post, it hit me. Father's Day and the answering of this question were meant to coincide all along. Because, truth of the matter is, there are many reasons why I am still Catholic, despite all the gripes against it, but among them all, one stands out most.

This. This is the reason I am still Catholic. 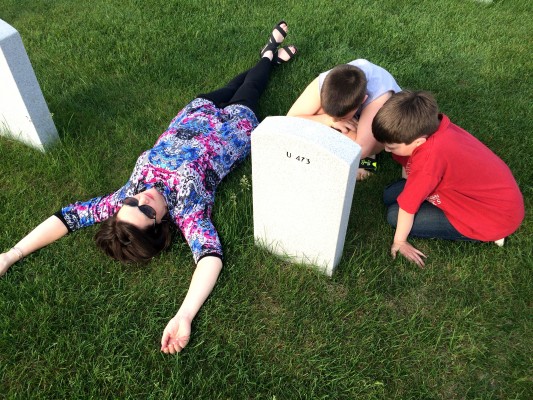 My father, Robert Beauclair; he's there, and he's in my heart, and I have a great hope that he's also in heaven. Last week, I had a chance to hang out with him a while with my younger three kids, and it was the most peaceful visit imaginable; truly.

Please don't misunderstand. My mother played a tremendous role in the whole thing, too. I will not forsake the fact that she was the one to drag us to Mass kicking and screaming as children (yes, we rebelled at times; who wants to go sit in church for an hour when you're young?), the one who steadfastly prodded us to keep at it all those years, even as my father stayed home on Sundays, worn from another late night and too much beer.

But something was happening even in those 35+ years my father stayed away that I couldn't ignore. Because even as we three -- my sister, mother and I -- got ready to leave for Mass each week at Our Lady of Lourdes in Poplar, Montana, knowing well what was missing, Dad still wanted us to go and asked us to pray for him on our way out.

It would be easy to interpret all this as the very reason we should turn away from the Church. Our own father couldn't summon the courage to get up and join us. Some spiritual leader he was. And yet...he wanted us to go. I remember him saying as much.

It tugged at me, and over the years, I began reflecting on it more, seeing it as important to my own faith journey. I thought about how my father had gone to seminary to become a priest, and then left, feeling that God had different plans for him, and how my sister and I emerged as a result of that difficult decision, and how grateful I was to have been given life.

And yet...dad had gone to seminary. He was close enough to the Lord that, at one time, he wanted to give his whole life to Him through the Catholic priesthood.

It's been said his mother, Mary, influenced him most of all in this direction, and I don't doubt it, for they were very close. But after her tragic death, which he learned about by telegraph at age 19 while at seminary, it wasn't long before he would leave.

This all got me thinking about Grandma Mary and her strong faith; the kind that had her on her knees every night, praying for her nine kids and husband, throwing  in a petition that maybe, her youngest son might go into the seminary someday, if it be God's will, of course.

Then I thought about my mom's father, and how, despite his own struggle with alcoholism, he'd made hanging out with God a daily thing. Despite his shortcomings, he kept going back to Mass, day after day, looking for the strength to get through, to set his mind on the one thing that seemed stronger than his desire to head to the liquor cabinet -- Jesus the Christ in the Eucharist, found present, body, blood, soul and divinity, in the Catholic Church.

It was all over the place, this Catholicism thing. And in many cases, the men pushed forward with it most tenaciously, even when they felt too weak to manage their own wills and lives.

It was something big, I came to realize, and I didn't want to just shirk it, despite not understanding it all, just because I was being challenged by well-meaning friends who had been led to believe the Catholic Church was the last place anyone should be. This choice of so many in my family to cling to Mother Church come what may was no small thing thing, I was seeing. And on some level, it seemed, I bore the responsibility of carrying this big thing forward in some way.

Not long ago, a friend of mine who isn't Catholic told me she's interested in Catholicism but can't imagine leaving her Protestant roots. Practically everyone she knows, except me, is Lutheran. And I get that. It makes sense because of what I've lived, and how my family and friends influenced my decisions toward faith. Since hearing her say this, I have an even greater respect for those who are not born Catholic and yet find themselves at Rome's doors. It can't be easy to leave everything you've known and set out on a new course, and one constantly mocked and ridiculed. What strength it would take!

I guess in the end, then, you might say that I'm not very strong at all. I'm certainly not very original. This Catholic thing has been a part of me both for as long as I can remember and longer than I can remember. I just picked up where others left off, really.

And yet, I did discover it for myself. As an adult, I was faced with a choice, and tough questions, and while, yes, those roots went long and deep, in the end I still chose the Catholic Church on my own accord and have never looked back. There's something so beautiful, warm, and amazing about it that I am finding myself compelled deeper into Her bosom every passing year. Whenever I've bulked, it's only been in selfish phases. Now, I can't imagine caving, ever. I am wont to defend Her because She and the Christ in Her have loved me so.

The bloodline of my own family first brought me to the Church's doors, but the Body and Blood of Christ that I find within have kept me drawing near. And this blood, this body, has the potential to transform not just one soul, not just one family, but the whole world.

Dad's no longer here, but the essence of him is always with me, and I am eternally grateful for both Dad and the faith he wanted so much for me to have, even in times when he did not feel worthy of Her, and Christ, himself. What an act of pure love.

Thank you, Dad. I finally figured out what it was all about, in part because of your love for the Church and the God who put Her in place; the love I saw peeking behind the brokenness in your eyes all those years ago. I know that you often felt you had failed me as a daughter, and yet in my eyes now, it's not even close. For you gave me the greatest gifts of all: my very life, and life in the Church.

Q4U: What has made you hold fast to your faith?