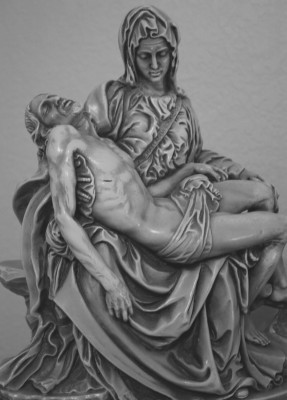 We refer to God's action in our lives as His Grace.

Often, we think of God's Grace as a feel-good fuzzy; something peaceful and sublime.

But grace itself is not always peaceful.

Sometimes grace is violent… sometimes God wants His life in you so much that it’s going to come in ways that mean you’re going to suffer. Not because He wills it but because He permits it. It says in Hebrews “I will shake you.” And I will shake all created things until all that is left is what is uncreated, what is unshakeable. Put simply — ‘Sometimes I’m going to let you suffer. I’m going to shake you free of all those things that you’ve put in place of my grace, in place of my life in you, until all that’s left is my life in you. Until all you can cling to… is me.' – Mark Hart

When my son posted the above quote from speaker, Mark Hart, to a Catholic Life Teen group, I was struck by its weight. That grace is often uncomfortable, even violent, is the undercurrent of all my fiction.

As life itself shows us, there is no change without action. An object, a person, and a fictional character, will continue in its existing state of rest or uniform motion in a straight line, unless that state is changed by an external force. The external force may come through another person or persons, it may be direct, it may even threaten our physical life. Still, without an external force, the tendency of any person is to do nothing, to remain unchanged.

Much of my writing revolves around grace as an external force that is often uncomfortable.

Without grace, Paul Dunaway in Mary's Mountain would not have changed his indulgent ways because he enjoyed money, sex, and power too much. But it costs him.

In A Hunger in the Heart, the question of whether Coleman Puttman Bridgeman III can bring himself to forgive his mother--the woman he believes killed his father--will cost him.

In Birds of a Feather, ten characters struggle with the same outpour of grace. And it costs each one of them.

Grace is God's intervention. And if we accept it, God's grace can heal us. But in the process, grace can be painful, even violent. And that is its cost. Will we pay it or not?

The notion that grace is healing omits the fact that before it heals, it cuts with the sword Christ said he would bring. --Flannery O'Connor