I have a son who is as insecure, quick-tongued, and defensive as his mother. Like most fourteen-year-olds, he lives in the moment. The real life cause and effect of one's actions is interesting to him only in past tense or when applied to persons unknown to him. (In other words, he believes smoking causes cancer because he doesn't smoke. By contrast, he takes exams at school, so he questions the idea of studying as a valid preparation.)

My son is a fine young man, but not terribly easy to live with sometimes. I picture him going in for OCD testing and falling a few centimeters short of actual diagnosis. Sometimes I rant to a friend who loves him almost as much as I do.

He's stretching his wings rather awkwardly, she said, but he's still doing okay. It might be you're being too hard on him. I get how aggravating he can be, just don't lose track of the fact that he's a really great kid. I really think he'll sort it out and come around.

You don't get it, I said. I'm not saying he belongs in juvenile detention . . . but three months in a desert monastery might be nice. Especially if we could get him somewhere that requires silence. Honestly, I've just had it with the attitude. Somehow, some way, I need an intervention.

Irritation was up and I was down heading into a Saturday morning. My son and I keep bees together. As positive an experience as it had been, I couldn't picture anything but conflict if we were working side by side.

I need you to do the bees by yourself today, I said. It will be better this way, I told myself.

Moments later he was back. A bear had come and torn a hive apart. This was a new experience for us. We spent the better part of an hour carefully putting the hive back together.

It doesn't make sense, I said as we finished. We lost our best honey producer to a bear, but being out here, I feel happy. 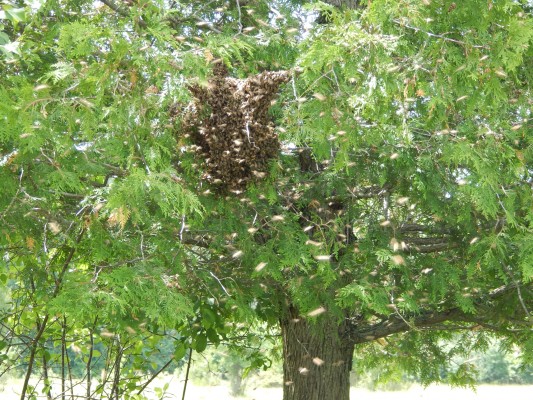 It didn't end there. Standing to catch our breath, we looked over to see something strange happening at a different hive. (More pictures and descriptions are here.) It took us a minute to realize it, but the far hive was swarming. Thousands of bees filled the air for hundreds of square feet. They then collected on the branch of a nearby cedar tree. By this time, two other kids and my husband had come, all of them nervous.

I watched in a bit of awe as my son took control of the situation. He ran for branch cutters and a box. (He and I were the only ones who knew anything about swarms. The bees have just gorged themselves on honey so traditionally don't sting.) Others were nervous. Confidently and cheerfully, he directed traffic, his hands in the bees and doing anything that made other people nervous. I didn't step in because he didn't need me. I took pictures that probably look to most people like pictures of bees. To me, they were my quirky answer to heartfelt prayers for help. I'd been desperate for an intervention, and God sent bees to show me my son.

Since then, in addition to many happy times, my son has continued to have spaces of irresponsibility, ingratitude, and unnecessarily argumentative behavior. I have alternately been patient and impatient with his lack of perfection and my own. The intervention didn't fix either one of us into an immediately improved version of ourselves. But it's given me something to fall back on. A picture in my head of a kind, generous, highly competent, and gentle hearted man lurking in the gangly body of my son.