The Solemnity of Mary: Her Silent Burden, and Her Solace

As the Solemnity of Mary approaches, I recall a homily by our pastor about the true meaning of the Feast of the Immaculate Conception: we celebrate Mary’s conception, not our Lord’s. While preaching about Mary being born without Original Sin, he made an important point: Mary was the first creature to be born since the creation of man without the veil that separates us from God. Our true selves are meant to be in total union with God and the veil of Original Sin acts as a wall, impeding that relationship. Jesus came to lift that veil so that we could be one with God again even though sin was still a reality. He opened the door to heaven for us so that one day, the veil could be completely lifted and sin could be wiped out of our lives. 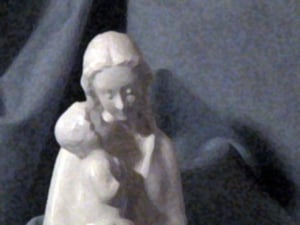 Mary was one with our Lord, right from the first moments of her creation; no veil separated her from her Creator. She was born to be her true self; singled out to be completely pure. Isn’t it ironic then that Mary, who was chosen to bear the unknowable, unfathomable God incarnate in her womb, had to bear the ‘sin’ of being pregnant before being married?

Pure, yet haunted by sin

Mary was one with our Lord, right from the first moments of her creation; no veil separated her from her Creator. She was born to be her true self; singled out to be completely pure. How ironic then that Mary, who was chosen to bear the unknowable, unfathomable God incarnate in her womb, had to bear the ‘sin’ of being pregnant before being married.

This ‘sin’ not only caused her grief at the beginning (in trying to explain the situation to her betrothed, Joseph, and to her family), the stigma likely followed her for the rest of her life. While Joseph and Elizabeth came to understand through God’s grace (Elizabeth by her pregnancy, Joseph by an angel in a dream), Mary’s extended family and neighbors were not afforded such knowledge. What must it have been like to tell them? Did she try share with them the full truth of her situation?

Carrying Jesus meant she had to carry her cross; she would have to endure knowing that people she knew and loved whispered, gossiped and spread false rumors about her behind her back. They could never have understood the glorious union she had with God, not just as His pure vessel, but as His only spouse, and the mother of His Son. She could take solace in that union. Her own silent burden was a foretaste of what Jesus would know in His life on earth–being misunderstood by His own people, especially his kin and neighbors. 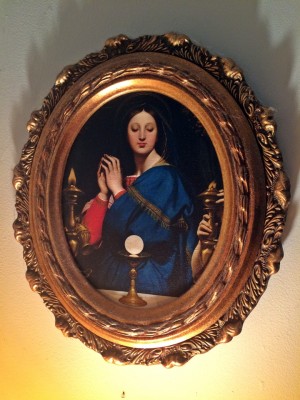 I could see Mary delighting in the fact that she had Jesus all to herself during those nine months of pregnancy. Anytime the sting of her ‘shame’ would hit, she could meditate on the Son of God, warm and safe in her womb. Containing the uncontainable – what solace that must have been!

We can experience that solace

While we may not have the privilege of housing the incarnate God in our bodies, we do have the Holy Spirit. And we too can share the intimacy that Mary shared with Jesus, especially through the Eucharist. Just as Mary’s blood flowed to her baby, nourishing Him and helping Him to grow, so now we can have His precious body and blood mingle with ours, nourishing every cell in our bodies, feeding our hearts and souls. While it would have been extraordinary to meet Jesus in person as a man, we can meet Him at any time, in any place simply by calling out for Him. We can even receive the Eucharist virtually by meditating upon it. We indeed have an extraordinary opportunity!

And we also share in Mary’s burden of being misunderstood because of our faith. We never have to carry our burden alone for she has gone before us.

Thanks be to God that Mary said yes and willingly carried her silent burden so as to partner with God in bringing Jesus to the world!

Mary’s Silent Burden, and Her Solace
Read
Sorrow, Presence, and the Desire to Be Heard and Understood
Read
Our Lady of Sorrows: Steadfast in her Fiat
Read