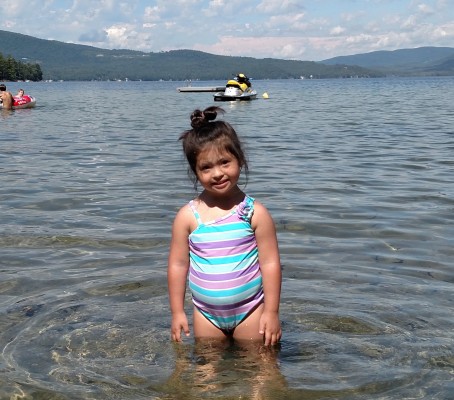 I saw the look in his eyes, and I almost wished I could have given him fair warning before he spoke. I knew exactly what he was going to say, and I also knew exactly how he was going to feel once he realized his error. I was standing in line at the post office, trying to be patient as my baby girl was doing her best to squirm out of my arms. I happened to turn slightly and caught the eye of the man standing behind us. He was staring at my daughter with this huge grin spread across his face. My quick glance in his direction was all he needed. The flood gates opened and out came the story. “Sorry," he said (acknowledging his staring). “My wife and I adopted our daughter from China over twenty years ago now. I was just feeling nostalgic as I was watching your little girl.”

Now, in all fairness, I could have just smiled politely and moved along. I just couldn’t bring myself to let it go. I’d been in this place too often and was starting to have fun with people’s reactions. “Oh,” I said. “We adopted our daughter from New Hampshire.” And there it was; the expression that I had become so familiar with over the past several months. The smile kind of fell off his face and his eyebrows furrowed just enough to signal his confusion. “Oh,” he replied. “Is she?”

“She’s not Asian,” I interrupted, as he tried to dig himself out of this awkward place. "No worries,” I continued as I saw his discomfort grow.  “A lot of people make the same mistake.”

It was about this time that the man standing behind this discomforted fellow wanted in on the conversation and, much to my new friend's dismay, leaned in and voiced his disbelief, “Where’s she from?” he asked with less tact than most might offer. Before I could answer, the man who began the conversation quickly shooed him off by gruffly proclaiming under his breath, “She’s from New Hampshire.”

This exact conversation has happened so many times, our family has coined a term for it; “Asian Encounter.” It’s quite understandable, really. Our daughter has long, jet black hair, beautiful dark brown eyes and an olive tone to her skin, all features that make those of Asian descent so undeniably beautiful. Being that I don’t carry any of the same features, people correctly conclude we adopted her, and then logically assume we did so from China. Those who don’t know our daughter see her more prominent features first and then mistakenly attribute the almond-shaped eyes to yet another Asian feature, rather than what is perhaps the most definable trait of those with Down Syndrome. It’s uncanny how many times this has happened. The list of those who have been mistaken even includes a doctor and a nurse practitioner whose own sister has Down Syndrome.

Of course, when I look at my daughter, I see Mary-Rose. I’ve lost all ability to see her any differently than the feisty, yummy little piece of Heaven that she is. When we first brought Mary home, I didn’t know that would even be possible. Proclaiming that my daughter has Down Syndrome is not something I ever thought I’d be happy, or proud, to assert. But now, I welcome the opportunity to share this about our little beauty and grow more proud each day of the way she rocks her extra chromosome.

If I’m going to be completely honest, I need to step outside my comfort zone and reveal the deepest corners of my soul. The truth of the matter is that, in the past, my own ignorance would leave me feeling “sorry” for the parents of children with Down Syndrome. Shortly before Mary came into our lives, I would sit in the car line each day waiting to pick up my sons from school and watch this little boy play with his mom. He would show up at the same time each day and happily run over to the same spot to stand and wait for his older brothers. It’s not easy to admit, but when I looked at this sweet little guy, what I saw first was Down Syndrome. Not knowing a thing about him, I identified him by his limitations and went so far as feeling sad for his mother, mistakenly thinking she must feel burdened by her son’s diagnosis.

I’ve always been somewhat fascinated by the story of the disciplines walking along with Jesus and being presented with, what on the surface, seemed like a simple question, “Who do you say that I am?” In essence, Jesus was asking them to reveal the deepest corners of their soul and genuinely wondered how they saw him. Did they look at him and see the labels the world had given him; hypocrite, blasphemer? Or was it possible for them to truly look beyond the popular opinion and love him for all that they intimately knew him to be? I love to put myself in the place of the disciples and reflect on how I would have answered that question. While I’d like to claim I would have known Jesus for who He was, I fear a more probable response would have been one that was more in line with the favored opinion of the time.

It’s taking some time, but I’m learning how to be an advocate for my daughter. In doing so, I’m simply trying to help the world see her as the whole person that she is and prevent her from being defined by her extra chromosome. When in conversation with others, I often hear people referring to those with Down Syndrome as, “the Downs boy” or “there’s a Down Syndrome girl in my neighborhood.” I understand they are not trying to be disrespectful, but I’m learning how important it is to help people come to know and love the person behind the diagnosis. By referring to those who have Down Syndrome in this way, these beautiful beings are immediately reduced to the popular, and often mistaken, traits known to be carried by the extra chromosome. Their unique and incredible personalities are stripped of them and they quickly become just one of a group of people who are assumed to be all the same.

Earlier in the gospel, we find Jesus answering a question posed to Him from the disciples about His purpose in teaching his lessons in parables. Jesus explains that, for the disciples, the “mystery of the Kingdom of God has been granted (them).” To others, however, “everything comes in parables.” I understand this to mean that God can only reveal  himself to those who make the conscious choice to know him. To others, the lessons will be there, but will be impossible to decipher unless they open their heart to the teacher.

God knew my heart needed to sort through a serious case of mistaken identity. And He sent me the manual for love in what is perhaps the cutest package ever designed. I now understand that I have a priceless tool in my hands to teach others about the gift of acceptance and the beauty of loving each of God’s creations for everything that they are. Since we opened our hearts to Mary-Rose, we have come to unlock the mystery behind the extra chromosome and are reminded that each and every one of God’s creations are  priceless and are meant to fulfill a piece of His will that they, and only they, can do.

On the Other Side of Fear, On the Edge of the Kaibab Trail
Read
Summer School Isn't the End of Summer Fun
Read
"All Aboard!"
Read