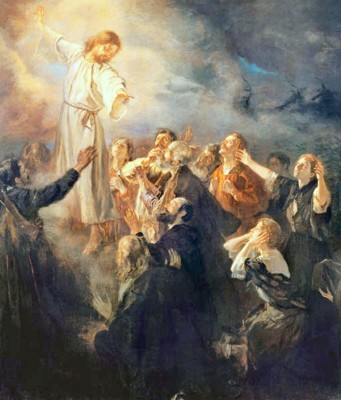 We’re all familiar with the story of the Ascension. On a Thursday (or a Sunday in some dioceses) some time after Easter but before Pentecost, Jesus bid farewell to His disciples and ascended to Heaven to sit at the right hand of His Father. And this is a great mystery: a man (who is also God) is eternally seated at the right hand of the Father (who is God), and thus Man is drawn into the life of the Trinity. God is utterly beyond our ken, the “wholly other” as Pope Benedict has described Him, but Jesus is not, and it is in Jesus that we see the Father.

But these days I find myself drawn to a different aspect of the Ascension: not Jesus’ manner of going, nor His heavenly destination, but the fact of His leaving. Before the Ascension He was accessible to His disciples and to all those within range of His voice. By leaving, so He said, He was able to send the Holy Spirit on Pentecost—and thereby He became accessible not just to those within earshot but to all those within reach of the Spirit…which, ultimately is everyone.

It’s an amazing thing, really: through the Ascension, Jesus becomes accessible to us; and through us, Jesus makes Himself accessible to others who do not yet know Him. The Almighty God chooses to work through fallible men and women like us, His wonders to perform.