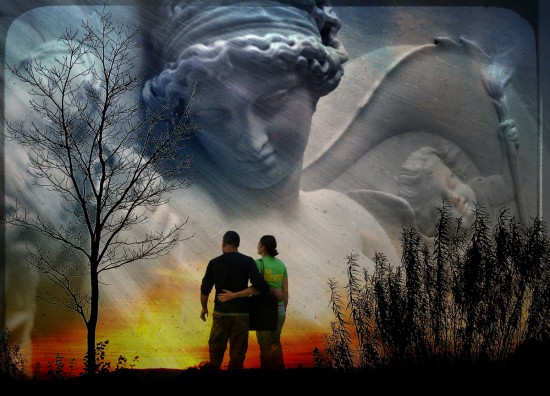 If you close your mind to these messengers of God, they sit like gold in a bank, useless unless we give them permission to act.

An angel is a pure spirit created by God. The Old Testament theology included the belief in angels: the name applied to certain spiritual beings or intelligences of heavenly residence, employed by God as the ministers of His will. The English word “angel” comes from the Greek angelos, which means ‘messenger.’ In the Old Testament, with two exceptions, the Hebrew word for “angel” is malak, also meaning ‘messenger.’

Some may never see with earthly eyes these heavenly beings or know that they exist. Many are unaware of the numerous ways they have protected and guided us.

The phone call comes on a Saturday night.

I listen to the police in shocked silence.

“Your son has been in a serious car accident.”

“No, we have not ascertained the extent of his injuries.”

“We did use the jaws of life to extract your son and his girlfriend from the vehicle.”

“No, I told you, I cannot tell you the extent of his injuries but if you head over to Trauma 1 at the Civic, they will give you an update.”

"All I can tell you is it seems that the vehicle did flip end over end and then barrel-rolled down into a ditch filled with water.”

"Off the record, I will say that in 25 years of service, I have never seen a car look as bad as his does and not have someone dead on arrival.”

Sheer heart-stopping panic grips me. I can hardly breath and my heart is pounding. We pass his car on the side of the highway. Spot lights, a crane, the car is on a flat-bed trailer, every side crushed, dented. It looks like a giant has taken a baseball bat and swung about a hundred times. All I can think is,

“If the car is that bashed and dented, how is our son who is only flesh and blood and breakable bones?”

At the hospital, the emergency room nurse ushers us into Trauma 1 at the Civic Hospital,

“Well, you might as well just walk in and look around. This is trauma 1. As you can see, we were ready for the worst-case scenario”

Daniel stands at a sink, washing blood off his face and arms by himself!

I looked at my son.

I slowly turn to look at the emergency room nurse, then at my husband.

I am shaking. My mouth drops open.

“If you had been here when Daniel arrived, you would have seen the entire team. As you can see, this young man does not even have a broken pinkie finger. If his seat belt hadn’t been buckled up 10 seconds before, he would have been ejected from the car through the front windshield. You should have heard the doctor ranting and lecturing when she heard that he had barely clicked his seat buckle closed. She kept telling your son how lucky he is. His girlfriend is an angel. She literally saved his life.”

Daniel is white. His face is drained of all colour and he is covered in blood.

“Not mine, mum. Erica got a cut on her forehead and bled all over me. Ma, I should be dead. I should be dead!! If Erica hadn’t bugged me, my seat belt wouldn’t even have been done up yet.”

Later that night, as my husband prayed, he had an inner vision of angels catching the car as it rolled. That is the only practical explanation for us.