Book Notes: Gem Babies Odyssey, a journey to the discovery of hope

The title of this book, Gem Babies Odyssey, had me wondering what a gem baby was. The back cover write-up suggested human trafficking victims and a book about discovering how to bring hope into situations of despair. It is also a book about finding purpose in life in times of challenges and heartbreak.

I was drawn in by the opening love story. The second sentence, “She studied art and he journalism” gave me some idea of the type of relationship young college students may find intriguing. Art and writing are also my passions. There are secrets to be revealed and a tragedy to endure as the book tosses you into loss early on. This story is about pain transformed. It isn’t transformed easily which gives believability to the chapters devoted to creating new meaning after loss. 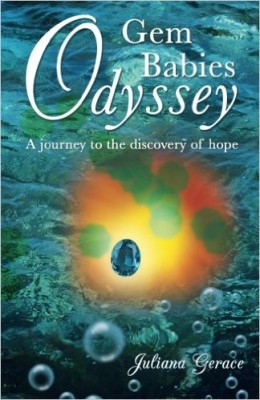 A Catholic Discovery Book that is Pro-Life and Pro-Love

My favorite paragraphs in this book are the descriptions of place, dress and shared meals. Gerace has a knack for creating characters around the simple things we do each day and highlighting the present moment. The relationships are believable as well as ideal in some cases. I asked the author to provide some study questions for a book group to pull out some of the sharing points that the book offers. It is an enjoyable book to read even as it creates awareness about human trafficking through Catholic thought. Gerace is working on her second book, hinted at by the protagonist in this first book which concludes with a good dose of hope. It may leave you wondering about vivid dreams, the way God speaks to us, the communion of saints, our vocation to uplift society and how it may be done by encouraging the gifts and talents of those we meet every day.

Hang in there as you first hear about the “gem babies” and the way they make themselves known. This is not fantasy or science-fiction; it is about paying attention to our dreams, our loves, our friends, and our pain to open paths for hope.

Juliana Gerace earned her doctorate in ministry in 2010.

Study Questions for Gem Babies by the author, Juliana Gerace

Your purchase of Gem Babies Odyssey through our affiliate link helps support CatholicMom.com but costs you nothing extra.