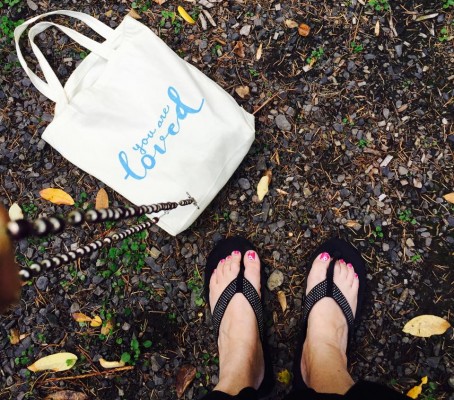 Let's just get this out of the way now - I'm a talker.

While I'm not the chattiest of all the women I know, I think I could hold my own in a talking contest. Especially if I got to talk about faith and family and the state of the world. I'm not a big fan of chit-chat; I like to go deep.

So when my spiritual director suggested I go on a women's retreat as a kind of  "capstone" experience after meeting with her for six consecutive weeks, I thought it sounded like an awesome opportunity to connect with other like-minded Catholic women. It took surprisingly little time to talk my husband into letting me go for the weekend. My first retreat en sola - hooray!

Upon arriving at the retreat house, someone casually mentioned, "Ladies, enjoy your conversation, because there won't be any talking allowed after dinner." Huh?! Saywhaaaaaa? A women's retreat with no talking? Isn't that an oxymoron? I quickly surmised that I'd either a) slipped through a vortex into an unnamed circle of hell, or b) someone was punking me. I awaited the emergence of a hidden camera.

After a brief stint of sheer panic (I have to talk! I can't be alone with my own thoughts - it's scary in there! What did I get myself into?!), I had to chuckle as reality sunk in. I thought about how, yet again, Our Lord (and my spiritual director, as His accomplice) has a pheNOMenal sense of humor. Me. A talker. Unable to talk.

If the younger version of myself learned that future me would actually participate in a silent retreat and actually enjoy it, younger self would have dropped dead from shock. Ha! You'll never survive, I would have told myself.

But I did it. I survived. In fact, I more than survived. I - the real me - thrived. Nothing came out of my mouth but prayers (morning prayer, Mass, confession, evening prayer, stations of the cross, the rosary, personal meditation).. And it was evident the Holy Spirit was working. I had been afraid - afraid of the silence. And yet, God Himself is in the silence:

I learned on retreat is that less really IS more. Here are other nuggets I picked up:

If you'd like further instruction on why we need silence and solitude as an integral part of our spiritual journey, may I suggest reading The Way of the Heart by Henri Nouwen. It is a wonderful, pithy text that pulls from the wisdom of scripture and the Desert Fathers to draw us into a deeper connection with God our Father.

And never be afraid of the silence, my sisters, for truly God Himself awaits you there.

Heather Anderson Renshaw is a wife, Mama (x5) and on-fire Catholic revert. She’s a national speaker, author/writer ( Death By Minivan, Real Catholic Mom,  All Things Girl: Truth For Teens, Take Up And Read), nap-craver, kitchen dancer, minivan singer, coconut milk latte drinker, and laundry avoider. Heather prays all may experience the healing power of Divine Mercy so they can rejoice and be free.