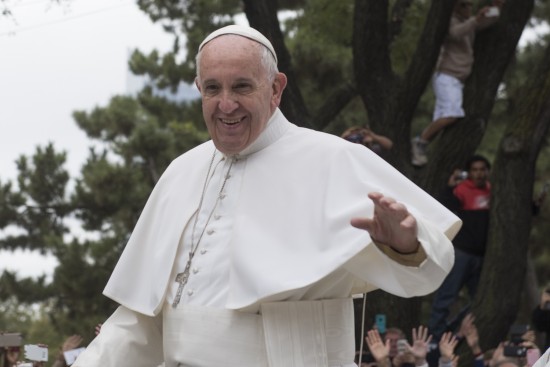 “He’s going to have to answer to God for this!” a friend commented to me after Pope Francis addressed the joint session of Congress. At first, I too wondered what the Pope was doing.

The papal dust is settling and reactions on his 6-day visit are coming into focus. The lecture to Congress that never was--scolding Democrats for supporting abortion—caused rumblings in the pews among the faithful. So much talk on environment and climate while only a mention on the sacredness of life at all stages, made some nervous. Others were angry. Among many, the question: Is the Pope Catholic? went from sarcasm to literal.

When I asked my husband if he was disappointed with the Pope’s approach with Congress, he replied: “He’s a Jesuit. It’s a chess match.” He believes Pope Francis is making his moves strategically towards the end game of evangelizing.

If you are still judging Pope Francis as making the wrong moves during his visit, I think you are the one who is wrong. Here are my reasons:

I dare to say that no one in history has ever visited the U.S. and received as much media coverage as Pope Francis did. Neither has anyone ever generated such enthusiasm to live out the teachings of Jesus Christ.

To criticize the pope and believe he’s not following the will of God would mean that all his prayers and all the world’s prayers for him are not kicking in. It would mean the Holy Spirit has informed you but did not get through to the pope.

When St. Peter reacted negatively upon hearing of our Lord’s plan to win our salvation, Jesus told him:  “Get behind me, Satan! You are a stumbling block to me; you do not have in mind the concerns of God, but merely human concerns” (Matt 16:23).

Our concerns for the Pope should be channeled into prayers for him and into trust that the Holy Spirit has his back.

Go Ahead and Be a Martha
Read
Want to Start an Argument? Just Say “Yoga”
Read
The Devil Has a Microphone
Read